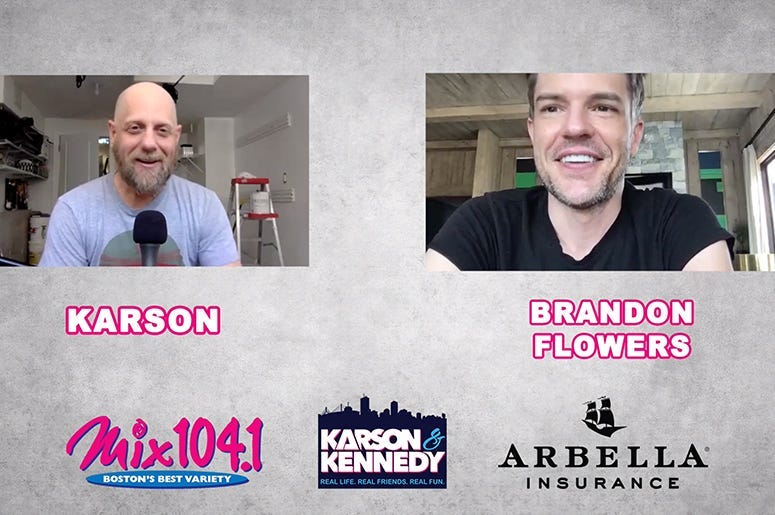 Mix 104.1's Karson caught up with Brandon Flowers of The Killers to discuss the band's recent tour cancelation, the new album Imploding the Mirage, and some of his vocal influences over the years. There's also a little bit of rivalry between him and OneRepublic's Ryan Tedder on Songland!

"[It's] my first Zoom meeting," The Killers singer says with a smile as he connects with Karson over, arguably, the most important communication tool since Alexander Graham Bell's telephone. It's not that he hasn't been asked -- he's just not usually the one who pushes the buttons on these kinds of things. "I'm not a computer gadgetry wizard -- I've done it with my drummer, he's better at that stuff."

Flowers and drummer Ronnie Vannucci Jr. have been keeping fans updated on their lives apart from the rest of the band, and more importantly their fans, in a series of YouTube videos and TV appearances. The Las Vegas rockers also recently released a new single from their forthcoming album Imploding The Mirage, titled "Caution," which premiered on RADIO.COM stations nationwide in early March.

Initially slated to hit the road to support the record, the band was forced to postpone a world tour as we all ride out the current COVID-19 health crisis.

The gravity of the situation is starting to "sink in," says Flowers. "We spent a lot of time on the album, and usually it culminates in a tour -- and that's not going to happen anytime soon," he admits. "But we're really proud of the album..."

"Music always brought me a lot of joy, and an escape, and healing when I was coming up and still does. So, we're excited for people to hear it."

Reading through comments on the band's latest single, Karson enjoyed what fans were saying about Brandon's voice, likening him to superstar quarterback Tom Brady whose craft steadily improved year over year.

"When we started the band it wasn't something I was that concerned with, funnily enough. It was more about just being in this band, and taking on the world... I didn't really consider what kind of performer or singer I was. It was just more about the guys and the camaraderie and all that," he admits. "And then I realized... I think it just came with time and with a little bit of wisdom and observing other people that I look up to in their careers and realized there more to it if I want to keep doing this."

Some of Flowers' influences, as far as voices go, he says are Depeche Mode's Dave Gahan, who admittedly has a different voice than his own. Frank Sinatra and Morrissey also get a shout as Flowers is an admitted fan of crooners. "But I'm not a crooner," he acknowledges. "People that sing in my range are people like Bono. We have a really similar range... He's done some of the most impressive stuff vocally that I've ever seen and I love."

Fleetwood Mac's Lindsey Buckingham, another admitted influence for the band as a whole, contributes guitars on their single "Caution," and says his inclusion came about after jokingly bringing his name up while recording in the studio. "We were in L.A. and we just threw a call at him... He showed up a couple of days after the call. A lot of people nowadays will work remotely but it was great to be in L.A. and have Lindsey pull up and work with him in the studio."

Some other surprising (or not so surprising) guests on the record, Brandon says, include singer k.d. lang, Natalie Mering from Weyes Blood, and Adam Granduciel from The War On Drugs to name just a few.

As far as getting back on the road, Flowers says they're simply pushing everything back a year when, fingers crossed, everything will be back to normal.

Check out the full interview above as Flowers jokes about not wanting to give any songwriting secrets to OneRepublic's Ryan Tedder on the TV show Songland -- and be sure to pick up Imploding The Mirage, due on shelves and online later this year.
This post is sponsored by Arbella Insurance. Here For New England. Here For Good.