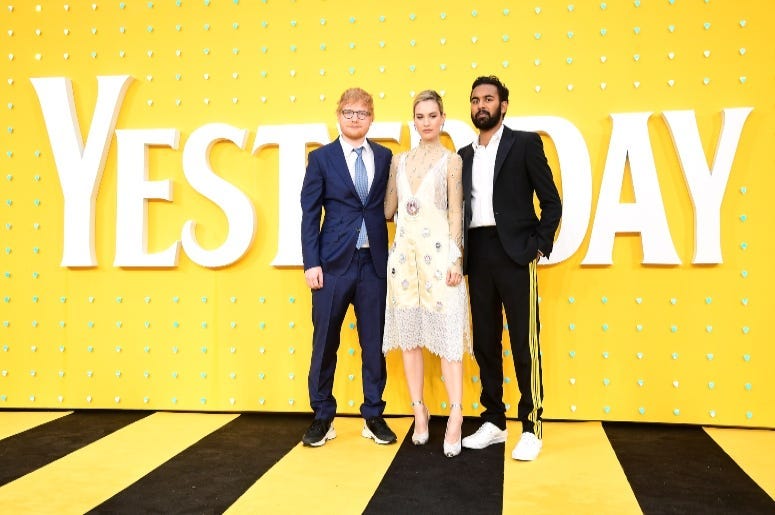 honey Ted and I had a weekend Movie Date Night at Home watching YESTERDAY. A movie directed by Danny Boyle who is famed for Slumdog Millionaire & Trainspotting w/ Oscar-nominated Richard Curtis, screen-writer of Four Weddings and a Funeral, Love Actually and Notting Hill. YESTERDAY is a rock-n-roll comedy with multi-themes involving career, music, friendships and a lovestory that prevails. Jack Malik (Himesh Patel) is a struggling singer-songwriter, who gets in a freak accident when a worldwide power surge happens. When things come back on about 12 seconds later, the world forgets, or doesn't know about thingies that were #1 .. Coke doesn't exist, Harry Potter, Oasis.. or The Beatles.  Jack can't believe the Beatles are gone. He decides to remember all their songs, and performs them. All of a sudden Jack gets discovered as the Greatest Singer-Songerwriter w/ his original songs suchs as 'Let it Be' and 'Yesterday' ... as well as the big catalog of Beatles tunes, that most think are his.

Whether you're a Big Beatles Fan, or like them, or don't really care about the Beatles, this movie makes them relevant. You're surprised how many songs you know, plus the thought if none of them existed. Was it all bad that Jack brought it back w/ the misconception of those songs being his? Is the Love for his music and the Beatles more important, than the Love of his Best girlfriend since middle school and his manager, Ellie (Lily James)?  Ed Sheeran (Ed Sheeran) is an awesome support in the movie w/ funny one liners and freshing up the Beatles songs for today.  How about 'Hey Dude'???

YESTERDAY was a surprising movie to the senses and emotions. It didn't get nominated for anything Oscar, which I find disappointing. It wasn't the usual music themed involved romantic comedy. It's funny, creative, thought provoking, fun and all-around emotion grabber in many ways. You can relate to the characters. The talent is incredible. Himesh Patel, who portrays Jack Malik, is incredible. He plays & sings all the songs with stellar acting skills. He definitely fits the part, and makes it believable why the Beatles needs to exist, and why he's the guy to do it.  You will have to watch the alternate ending, outtakes and the recordings Himesh did after you watch the movie on Netflix (dvd is out right now).

Oscar nominations that doesn't include anything for Yesterday or Ed Sheeran.  Lots of snubs too.