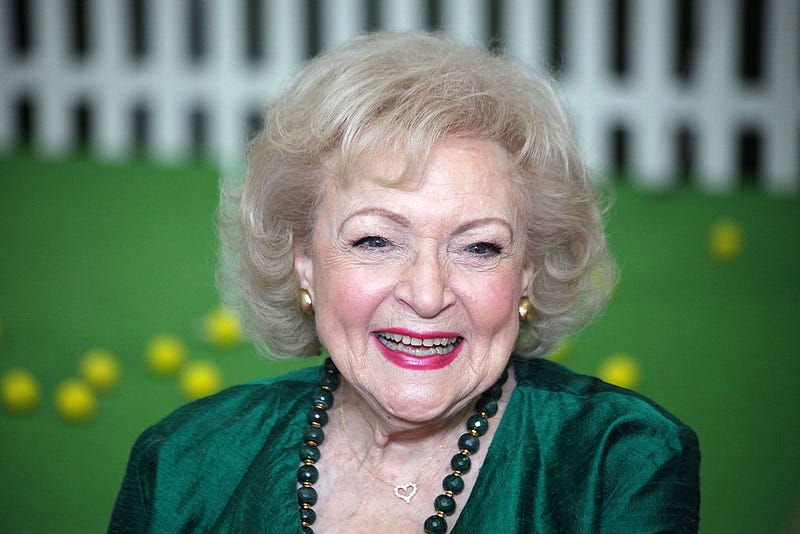 The beloved actress, best known for her comedic work on numerous TV sitcoms, passed away on Friday, reports People. She was 99. "Even though Betty was about to be 100, I thought she would live forever," Betty White's agent and close friend Jeff Witjas told the outlet in a statement.

In an interview with People for this week’s cover story, White explained how she felt about celebrating her centennial birthday, which she would have celebrated on January 17.

The “Golden Girls” star explained how being “born a cockeyed optimist” is the key to her vibrant personality that paints her as a young soul.

“I got it from my mom, and that never changed,” she noted. “I always find the positive.”

White began her life in Oak Park, Illinois. She got her start in radio and television, eventually creating a career that has lasted for over 80 years.

Her most memorable roles include the witty Sue Ann Nivens on the long-running “The Mary Tyler Moore Show” and the sweet Rose Nylund in the groundbreaking series “The Golden Girls,” which ran for seven seasons.

She enjoyed recurring roles on “Boston Legal,” “The Bold and the Beautiful,” and “Hot in Cleveland," in addition to appearances on “Bones,” “Community,” and “Young and Hungry.”

To add to her impressive resume, she became the oldest host of “Saturday Night Live” in 2010.

At the time, she told Newsweek it was “the scariest thing I've ever done. It was really funny stuff, but it was a challenge."

In 2019, ahead of her 98th birthday, Betty revealed that the secret to her longevity was “hot dogs and vodka.”

During the coronavirus pandemic, White stayed home to protect herself from contracting the deadly virus.

“I’m blessed with incredibly good health,” she said at the time. “That’s something you appreciate a lot.”

Through the ordeal, White let loose by sipping on vodka martinis while snacking on French fries and hot dogs. She has also attempted to play Scrabble with friends over Zoom but misses game nights.

Aside from acting, the spunky star revealed she loves reading the newspaper and doing crossword puzzles.

While White never had biological children of her own, she is survived by David, Martha, and Sarah Ludden, her stepchildren from her marriage to Allen Ludden, who died of stomach cancer in 1981. She never remarried following his death telling the late Larry King that “once you've had the best, who needs the rest?”