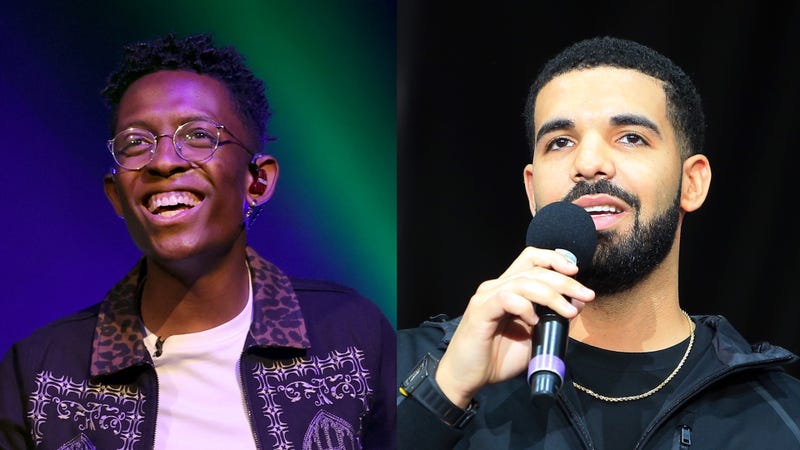 Breland may be a newer Country artist, but he’s wasted no time making a big impact on the genre. Recently celebrating his first #1 song, “Beers on Me” with Dierks Bentley and HARDY, he hopes it’s the first of many as he plans to continue using his music to expand the boundaries of the genre and unite all music fans.

“I think Country music as a genre has been siloed away from the other genres,” he told Garcelle Beauvais and Loni Love of The Real Talk Show. “We might see Dua Lipa and DaBaby hop on a song but we don’t see those types of cross-genre collaborations with Country music a lot of times.”

His solution? A collab with Drake!

“I’m tryna get Drake on a Country song,” Breland said with a huge grin on his face before looking directly into the on-set cameras to challenge Drake. “C’mon Drake! Don’t do my dirty. We need to get you on a Country song if you talkin’ spicy! We want cowboy Drizzy!”

Surely Drake taking a walk on the Country side would break the Internet, but for Breland it’s about so much more than the headlines. “I feel like when you can bring those genres together, you can bring different types of people together,” he shared. “And when you bring people together and give them common ground it’s a really powerful thing, that unification.”

Diversity, unification and acceptance are at the top of Breland’s list when it comes to making music. He believes in the power of music and has every intention of using it to encourage fans. “I want people to take away the message that you don’t have to fit cleanly in a box,” he stated. “You can pursue whatever dreams are on your heart and on your mind to pursue regardless of what obstacles may be in your way.”

He continued, “I think a lot of times the world tries to tell people that they can only do XYZ based on where they’re from or what they look like or who they love or whatever reasons. But for me to be doing this in this space, in this way, I just want people to feel encouraged to pursue their own path.“

Breland admits the idea is a lot easier said than done as there is always bound to be pushback. For him, it’s the traditional Country fans who feel their favorite genre is being muddied.

“I want to let the people within Country music know that I have respect and reverence for the genre,” he said. “I’m not trying to take anything away from it. I’m simply trying to add something new to it.”

That being said, the 26-year-old has no plans to ease up on his dreams.

“I don’t think anyone who has ever tried to make history has done it without pushback,” he confidently stated.

Watch out, world! Breland has arrived!