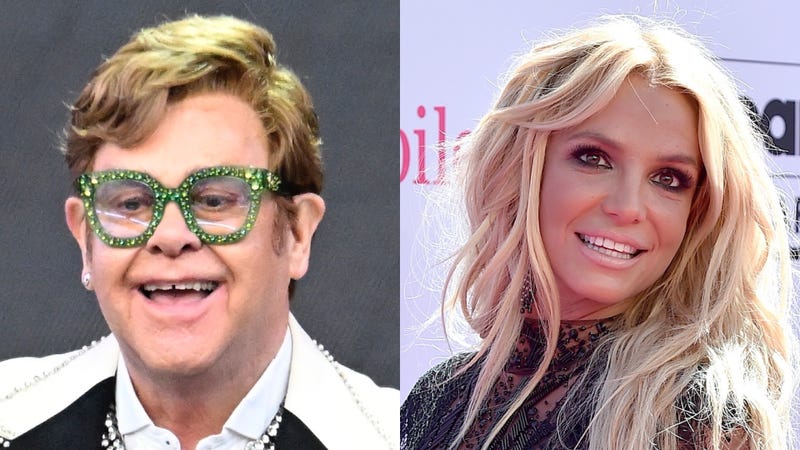 The highly anticipated Elton John and Britney Spears collaboration, “Hold Me Closer,” a new take on Elton’s 1971 hit, “Tiny Dancer,” has finally arrived! Already hitting #1 on iTunes in 30 countries only hours after its release — it’s clear the collab is a masterpiece.

The newly revamped song, which also mixes in flavors from John’s 1992 release, “The One,” is produced by Andrew Watt and Cirkut.

“Andrew and I have been collaborating on a bunch of music recently, and one day he called me up to ask if I’d want to produce something for Elton together,” Cirkut told Variety in a recent interview surrounding the creation of the song. “I’ve been a fan of Elton’s since I was young, so of course I had to be involved.”

Watt added, “There’s a lot of pressure to sit down and be like, ‘Hey Elton, here’s another version of 'Tiny Dancer.'’ What I had to keep telling myself is that this is not a new version of ‘Tiny Dancer.’ It’s a great addition to an already amazing piece of art. Luckily, he loved it.”

The pair found inspiration through different parts of the original tune, but also in moments spent with Elton and more specifically — his merchandise!

“We were able to mix in and re-arrange the original strings, guitar, piano and background vocals from ‘Tiny Dancer,’” shared Crikut before sharing the inspiration to add elements of “The One” came from seeing one of Elton’s merch pieces — a hoodie — while hanging out with the legend.

“We’re staring at this hoodie while sitting on the couch, and it hits Elton: ‘What about 'The One' for the verses?’ He starts singing it, but he’s singing it a little different. We went through melodies together, and it’s the words and the vibe, but the melody is repurposed to work over the chords. We took the vocal from that and tweaked it. ‘Tiny Dancer’ and ‘The One’ are 20-something years apart, but they worked together unbelievably.”

And as for Britney being on the track? That was all Elton and it was a welcomed idea for Crikut who’d previously worked with Spears, and Watt who grew up with her music.

“The fact that it came together and she wanted to do it and how she sounded on the record — you couldn’t have made it up," said Watt. “It’s amazing. It’s a moment in time. She elevated the record so much and put so much of her own personality into it — all of her ad-libs, runs and soulfulness.”

He continued, “This song is just a celebration… It’s a song to go out and sing your ass off to at Elton John karaoke. You can get lost in it. You want to have a good time.”