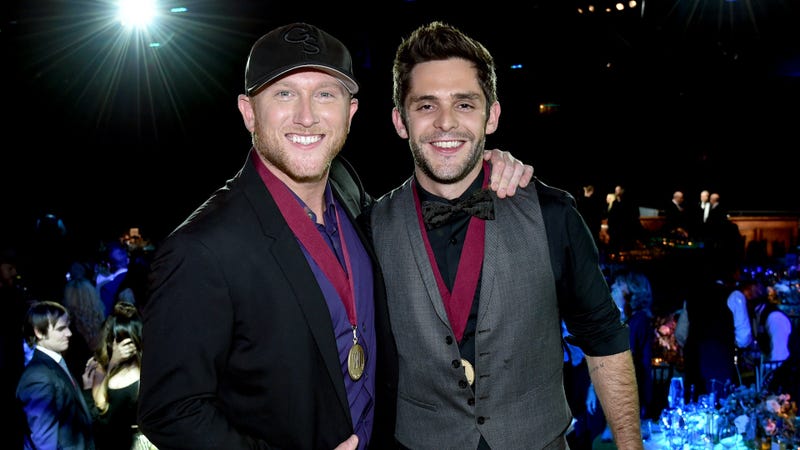 Cole Swindell’s latest single is arguably one of the biggest of his career. A spin off the ’90s classic, “Heads Carolina, Tails California,” by Jo Dee Messina, Cole originally planned to tackle it as a duet with co-writer and fellow Country artist, Thomas Rhett.

While on the road with Rhett’s Center Point Road tour in 2021, Cole and Thomas sought to write a duet they could perform together, but after finding their stride with, “She Had Me At Heads Carolina,” it turned out to be a fit for only one.

“Me and Thomas Rhett talked about this on tour last year, about wanting to do a song together,” Cole told Audacy’s Rob + Holly. “That was the original plan, was for me and Thomas Rhett to sing, whatever this song became, together.”

He continued, “The angle we wrote it in the room, it just didn’t make sense really for both of us and TR is such a great writer anyways, so I’m proud to have him be a part of it.”

Other songwriters on the project included Ashley Gorley and Jesse Frasure, as well as the writers of the original, “Heads Carolina, Tails California,” Tim Nichols and Mark Sanders.

“The first step was to call the original writers, Tim Nichols and Mark D. Sanders,” he said of the songs initial start. “They wrote the original Jo Dee version and we didn’t know what they were going to say.”

He continued, “Turns out hey were honored we chose their song to kind of put a spin on and do our own way, so we wanted them to be involved there.”

Another individual they wanted to be sure to involve was Jo Dee, which they ended up doing through the music video. “We wanted her involved as much as she wanted to be in any of it,” Cole said of Jo Dee. “My first time meeting her was literally on the set of the video shoot,” he laughed.

“To meet somebody you’ve been a fan of your whole life, to meet them on the set of the video for a song you wrote — a spin of her original — it’s mind-blowing. The whole thing, but I think it’s just of those things that was meant to be.”

We couldn’t agree more as the song is sitting at the top of the charts and leading more and more people to explore 90s Country.

“I think there are kids that are literally going back and falling in love with ‘90s Country music,” Cole said. “I feel like I owe that to Country music.”

Hear more about the song and what Cole has been up to by listening to his conversation with Rob + Holly above.