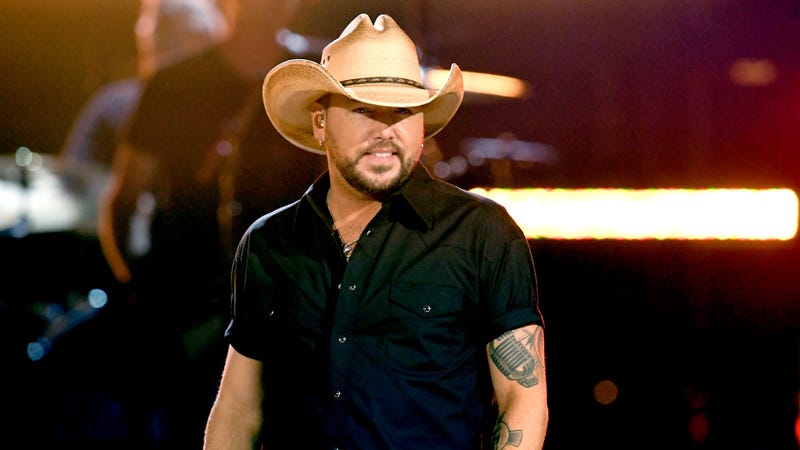 Fans aren’t the only ones busy celebrating Jason Aldean’s new music with the release of his newest project, GEORGIA. Turns out his son, Memphis (4), and daughter, Navy (3), are also spending some time with the album and their favorite songs may come as a bit of a shock.

“Navy’s favorite is the duet with Carrie [Underwood], she likes to sing Carrie’s part,” Jason told Audacy’s Rob + Holly before sharing his son has a bit more of a surprising favorite… well, at least for a four-year-old.

“Memphis, ironically his favorite song is a song called ‘Story For Another Glass,’” Jason said. “It’s funny to hear him talk about shootin’ tequila and limes and stuff, but hey, gotta start somewhere… With him having the Aldean name, it’s inevitable at some point.”

Both songs can be heard as a part of Jason’s fully-released double album, MACON, GEORGIA, which is available everywhere now.

“The fact that it’s all out now is cool because people can hear the album in its entirety,” Jason said of the two-part project, which was partly released in November 2021 with part one, MACON.

The full project marks Aldean’s 10th studio project and includes a total of 30 tracks featuring new music, live recordings and greatest hits from across his career.

Jason is currently readying to embark on his Rock and Roll Cowboy Tour, kicking off this July with special guests Gabby Barrett and John Morgan.

“To us, the focus is on some of the newer songs,” Jason said of going into rehearsals for the new tour. “All the older stuff we’ve played a million times — we know all those things. This year we’re going to add probably five or six songs off the new album that we’re going to put in the show and that’ll kind of be the focus.”

Tickets for the tour are available now. Find them here and listen to the full interview with Jason Aldean above.