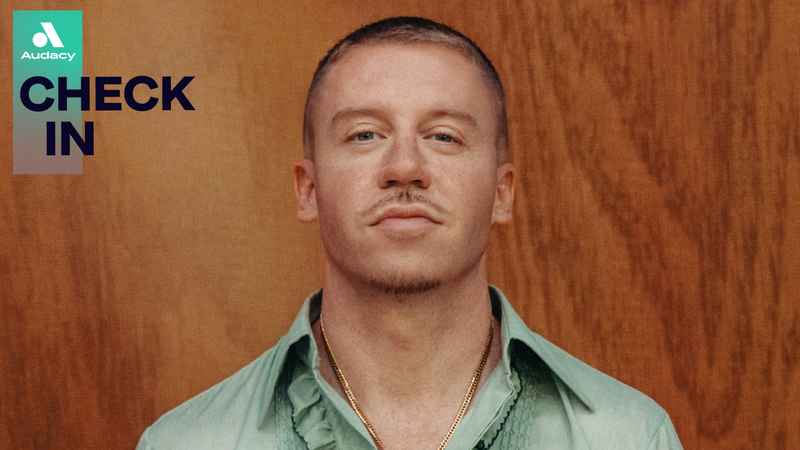 Macklemore stopped by the Audacy studios this week to check in with Mike Adam and talk about his new single, “Maniac,” and stepping back into the limelight after taking time away, and always feeling like he has something to prove.

During the last two years of his five year hiatus, when many artists kept releasing new music despite the woeful social climate and obstacles of quarantine, Macklemore consciously opted to take a step back, which for an artist such who doesn’t shy away from difficult topics, seemed a bit out of character.

But as he explained, “for me it was a time period where I didn’t want to take a space, particularly around the murder George Floyd. I didn’t want to come in and take up space… I wanted to support, I was out there. Seattle was definitely a moment… but in terms of actually taking up space, or making a record, or saying something, it didn’t feel like the right time.”

“I wrote a lot in the studio,” Macklemore added, “but I didn’t want to in any way come across as like, ‘let me promote something right now.’ I think some of the music, if it’s authentic, it should never feel calculated."

As for whether or not we’ll ever hear all those tracks, Macklemore revealed they’d be part of his next project, though noting that there would a “a lot left over.” But with Mike giving Mac the idea of maybe releasing a lost tapes project one day, a la Nas, odds are in our favor that we will one day hear those too.

Speaking of that new music, Mac’s first single, “Chant,” which as Mike pointed out, based off the first verse, alludes that Macklemore feels as though he has something to prove.

Responding to the presumption of feeling like an underdog, Macklemore said, “I feel like I’ve always had something to prove, and I think that that something is to myself. That’s who I compete with… I think the plight of the independent artists has always been, and that’s my journey.”

Acknowledging “that all that social stuff is a part of it,” Macklemore asserted that “the most important part is the art,” for which he is very competitive.

“I step into the studio and I'm very competitive… in the raps.. in the melodies, in the hooks, in the songwriting that we do. I’m competitive with everything," Macklemore expressed. "And I think that if you don’t have an underdog spirit you get left behind, and I’ve always had that.”

“Manic” is the second taste of new music from Macklemore, coming from his impeding yet-to-be-titled new project.

After explaining how he got his hands on the hook and then evolved the record from there, he revealed the track is “about a relationship that might not be the healthiest, but you still love that person.”

For all that and more check out Macklemore’s entire interview above and listen to his brand new track "Maniac" below.