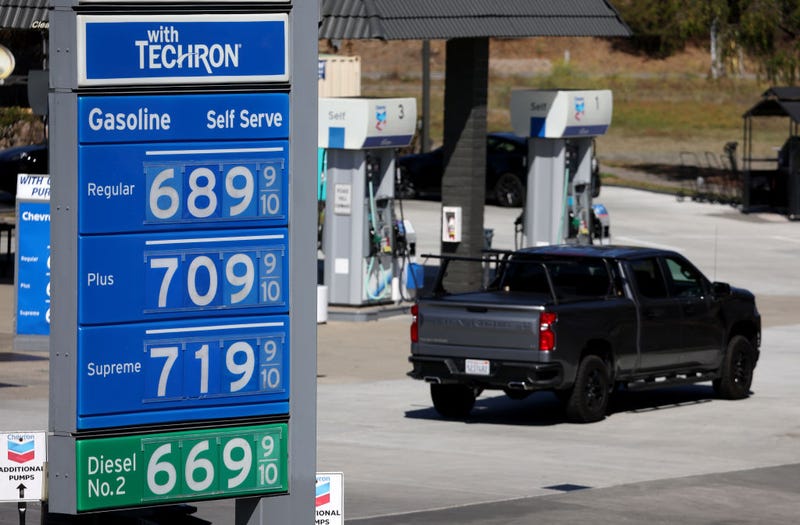 Gas prices over $7.00 a gallon are displayed at a Chevron gas station on October 03, 2022 in Mill Valley, California. Gas prices continue to surge in California with the average price for regular unleaded at $6.25 on Monday compared to the national average of $3.765 a gallon. Photo credit (Photo by Justin Sullivan/Getty Images)
By Lauren Barry, Audacy

As of Thursday, AAA estimated that the average price for a gallon of gas in the U.S. was $3.867, up from the previous day, the previous week and the previous month, when it was $3.779.

Average gas prices soared to more than $4 this summer but had started to come down in August. Why are they going up again?

Well, OPEC+ – a group of oil-producing nations lead by Saudi Arabia and Russia – announced Wednesday a list of 10 decisions that included cutting oil production by 2 million barrels per day starting next month.

According to OPEC+, the decisions were made “in light of the uncertainty that surrounds the global economic and oil market outlooks.”

U.S. President Joe Biden told reporters Thursday that he is disappointed in the group’s decision.

“Disappointment,” he said when asked for a reaction. “And we’re looking at what alternatives we may have.”

Biden also said Thursday that it “remains to be seen” whether he will meet with Russian President Vladimir Putin during the upcoming G20 Summit.

Putin has led an invasion of Ukraine since February that has resulted in countries, including the U.S. sanctioning Russia. The invasion and sanctions have impacted oil prices, according to the World Economic Forum.

ABC News reported Thursday that crude oil prices stood at $93, well below a high of $123 reported in June. Industry analysts told the outlet this week that the OPEC+ move to reduce oil production has “major implications” for gas prices in the U.S. in the near future.

“The move will cause a spike in U.S. gasoline prices that will last for months,” said ABC of the analysts’ info. Although the analysts said Biden can “reduce some of the immediate price hike,” they also said he “lacks an effective option to mitigate the overall cost increase for U.S. drivers,” according to the outlet.

Reporters asked Biden if Venezuela, a nation that the U.S.
has also sanctioned for government corruption, is an option for oil.

“What would Venezuela have to do in order for the U.S. to ease sanctions?” a reporter asked Thursday.