The NFL's controversial one-helmet rule is a thing of the past, and more than a third of the league is prepared to immediately welcome a second helmet into their rotation.

A few teams are bringing back classic helmets in 2022, with others introducing new alternates for the upcoming season. Here's a ranking of all 13 alternate helmets that will be used during the 2022 season:

Fresher than the rest 😮‍💨 pic.twitter.com/cTGeQK8wOM

The orange alternate tops that the Bears wear are excellent. However, a matching helmet in the same shade is just overkill. The Bears say their orange helmets will debut on Oct. 13, when they host the Washington Commanders on Thursday Night Football.

The Commanders’ alternate helmet will be gloss-black with a matching black facemask. The team’s ‘W’ logo is on the front of the helmet; numbers will be on both sides. The rear of the helmet has the DC flag. pic.twitter.com/fN3vV2gbhk

We aren't anti black helmet, but with some teams it just doesn't make sense. The Washington franchise is on their third nickname in four years, but burgundy and gold remain their team's colors. Why did they need a black alternate uniform?

These dudes getting us fired up for Oct. 30 🔥 pic.twitter.com/dreADo4dda

These black alternate helmets might be the best the Jets can do currently, but the new look that the team introduced in 2019 is one of the worst the league has ever seen. The Jets plan to wear their "stealth black" helmets three times in 2022; Week 8, Week 12 and Week 16.

They aren't as egregious, but we'll put these into a similar category as the Bears -- the Texans are one of the few teams in professional sports that pull off a red alternate uniform, but a matching helmet is too much. The "battle red" helmets will first appear in Week 9, when the Texans are slated to host the Philadelphia Eagles on Thursday Night Football.

While the Cardinal on this alternate helmet looks pretty cool, the Cardinals are another team who feels like they need a complete uniform refresh. From here, the only thing they have going for them is how good their traditional white helmets look. The team's Week 5 matchup with the Eagles will be the first time that these helmets are worn during the regular season.

There's not much to say about these -- they'll look solid with the team's black-on-black alternates. But what everyone is waiting for is the return of the Kelly green alternate helmets and uniforms, which will happen in 2023.

Any helmet with the Fleur-de-lis is going to look sharp. However, we do wonder if a white helmet would have looked even better with their all white uniforms. The Saints have yet to announce when these helmets will make their debut.

Activate the other side 😈 pic.twitter.com/kejFuuW5tn

The Panthers are a team where it makes sense for them to have a black alternate helmet, even if their typical silver ones are excellent. It's scientifically proven that these helmets will look 100% better if a player wears a matching black visor. These will also be a helmet that debuts on Thursday Night Football, with the Panthers slated to host the division-rival Atlanta Falcons on Nov. 10.

Built on Legacy. The 80s-90s uniforms are returning twice this season

Absence makes the heart grow fonder, and from here, the Giants look better with their full name on their helmets than with the "NY" they've used for much of their history. The Giants plan to wear these throwbacks twice in 2022; Week 4 against the Bears and Week 13 against the Commanders.

While we'd argue that the black throwback helmets that the Falcons wore with these uniforms was already perfect, their red helmets are classic and it's good to see them return. The Falcons full uniform kit right now is a trainwreck, but when they wear the red helmets in Week 6 against the San Francisco 49ers, they'll be among the best looking teams in the league.

Thanksgiving just didn't feel right without the Cowboys wearing these uniforms. It will be hard to pick against the Cowboys when they face the Giants on Nov. 24 while donning these.

While the Patriots have won six Super Bowl titles in the "Flying Elvis" era, they've never looked better than when "Pat Patriot" was on their helmets. It will be great to see this full throwback uniform return for the first time in a decade.

Chef's kiss. The belly of a Bengal Tiger is white, and some that get recessive genes end up all white. The Bengals white alternate uniforms have become very popular in recent years, and the addition of a white helmet figures to make this look a modern classic. 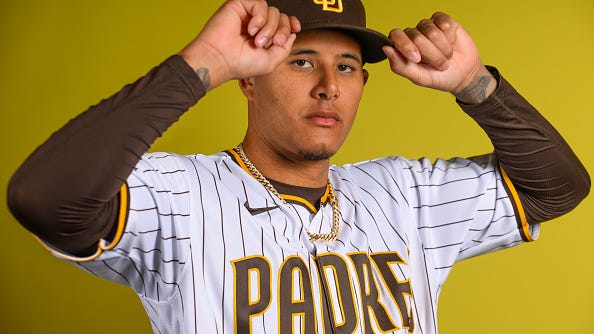