The Cowboys are expected to see an increase in offensive production when Dak Prescott returns to action, whether that be this week or next. Cooper Rush held down the fort as a capable backup but Dallas played a more conservative style the past few weeks.

With Prescott set to return, there is a domino effect within the Cowboys’ offense. The offense has been primarily using the ground game to find success with CeeDee Lamb as the main target through the air.

Michael Gallup has been trending up with seven targets in Philadelphia after just eight combined in the previous two weeks. That upwards trend should continue when Prescott returns.

“He’s seen 22% target share over the last two weeks and Dak is coming back this week it seems like,” Siddiqui said (8:42 in player above). “Gallup’s a very talented player. He’s running full route participation and he is the number two target behind CeeDee Lamb right now.”

Rizzuto then threw out an interesting nugget about the last time Gallup faced off against this defense.

“The last time Dallas played Detroit, Michael Gallup had himself a big game,” he said. “So if you can pick him up, he can be an instant starter I think.”

“You don’t want to just base it on that but Dak Prescott will be back. Dak Prescott tends to distribute the ball very well,” Rizzuto continued. “Michael Gallup should be a guy that should be rostered, definitely. We’ve had him on the waiver wire list … since like Week 2, so if you don’t have him yet, go get him.”

Gallup is the Cowboys’ second wide receiver behind Lamb. He should see his fair share of targets this week and could have another big game against Detroit.

“I would start Michael Gallup as a WR3 this week. I think they’re going to pass the ball more with Dak back,” Siddiqui said. “I think the Lions’ offense, if Amon-Ra St. Brown is back, they should be able to – D’Andre Swift back as well, potentially – this could be a little big of a high-scoring game if the Lions can get through Dallas’ defense.” 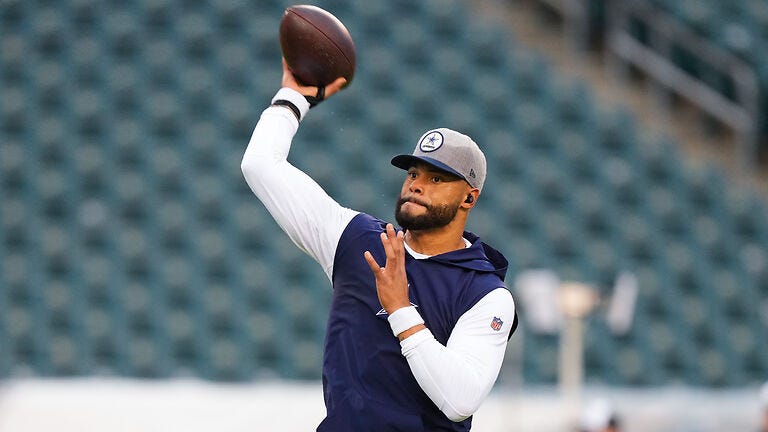