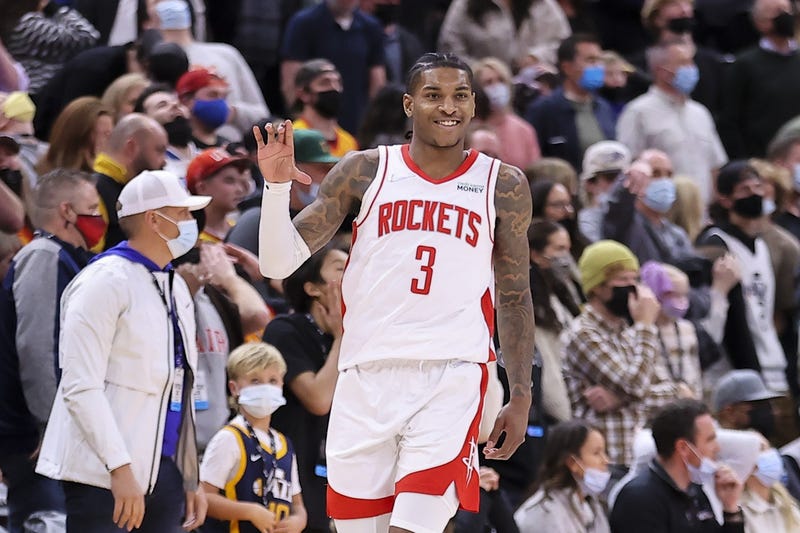 SAN FRANCISCO (SportsRadio 610)- Kevin Porter Jr feels at home. He’s playing for an organization that backs him 100 percent while playing with a group of guys he identifies with.

“It’s fun being around guys your own age,” Porter told SportsRadio 610 on Friday. It's like the chemistry is always going to be there. You don't have to (just) play together. Being off the court, doing the same things, being familiar with each other, always hanging out, liking the same things I like or me liking what he likes, all that comes to a whole.”

A year has passed since Porter was traded to the Rockets, and while there have been some bumps over the last 365 days, the Rockets guard believes he’s grown as a person.

“I’ve been thrown a lot of adversity, black clouds, and I’ve been challenged, and I’ve been handling it well. I feel like even if I were in a bad state I reacted to it the right way, and I respond better than I did last year.”

No one has ever denied Porter’s talent, but he fell to 30th in the draft after disciplinary problems during his one season at USC, and the off-court issues followed him in the NBA with the Cleveland Cavaliers.

He was arrested on November 15, 2020 on a weapons charge, which was later dropped, and the Cavs elected to cut bait with him two months later after an outburst towards a team official when his locker was moved to an auxiliary area. Despite the unfortunate ending, Porter has no ill-will towards the Cleveland organization.

“They believed in me. They took a shot on me. (Head coach) J.B. Bickerstaff, to this day, we still talk, and he’s very proud of me, and I'm very proud of what he's doing for that organization.”

The Rockets assigned Porter to the G-League following the trade, but head coach Stephen Silas and assistant coach John Lucas were in constant communication with him, and Silas says it was important to build a trust with Porter early in the relationship.

“He needs to know that you believe in him, but he earns that, and coming in, we didn't really know what it was going to be like just because of what had happened prior, so we had an open mind, he had an open mind, but I do over time, we've learned to trust each other, and that's what makes a relationship work.”

Porter’s time with the Rockets hasn’t been incident-free. He was suspended for the team’s game on January 3 after a confrontation with Lucas at halftime of the Rockets loss to the Denver Nuggets two nights before. Amid calls from national writers to waive him on the spot, the Rockets stood by Porter which he says has made his relationship with the team stronger.

“Having a having a family and having that reassurance that they want you as a member, and they love you for who you are not just what you do, or what you can bring, it does something with your mood.

“Every day you come in the building and being around these guys, it's a different frequency level coming in with this team. These guys, from day one, showed crazy amounts of love for me, and I just want to do everything I can to return it back.”

In his first full season as an NBA point guard, Porter’s scoring, shooting, and assists are down, while his turnovers are up, but he’s played his best basketball of the season in the nine games since the suspension.

In that nine-game span, the 21-year old has hit monster shots, most notably a game-winner the first game back from his suspension on January 5 in Washington, and then a dagger to seal a victory in Salt Lake City two weeks later.

Silas and the organization’s faith in Porter never wavered, even during the early season struggles and the blow up in the Nuggets game, and as he looks back on his year in Houston, Porter says that faith is the biggest difference between where he plays now and where he used to play.

“Some people had the same confidence and love for me (in Cleveland) as they do over here, but it was just different. I can count on two hands over there. In here, I know everyone in this building is here for me, and I'm gonna do everything I can to pay them back.”