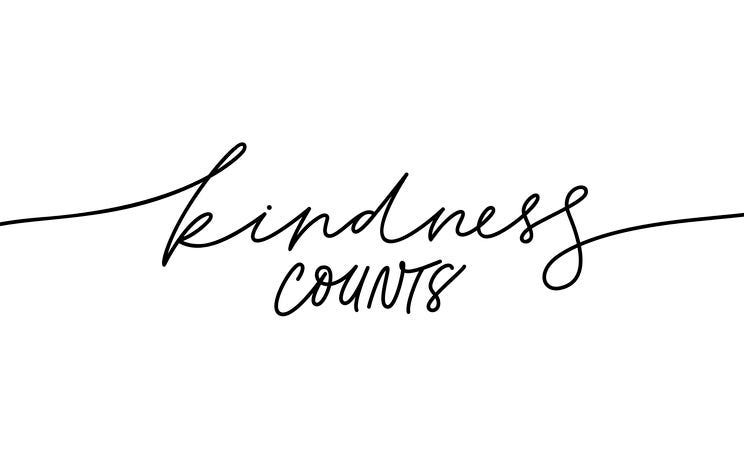 Have you heard of The Kindness Conspiracy?

I watched Chapelle on SNL over the weekend, and he mentioned it. So, I researched it, and what a fabulous concept.

Do something for someone that is unexpected, and see how it becomes a win-win for everyone involved. Genius!

The timing couldn't be better, either. My kids are celebrating Kindness Week at school, and I also find it ironic that the words KINDNESS and CONSPIRACY can best indicate your political party affiliation..But enough with that..I'm exhausted.

Back to Chapelle for a second. I don't really find him funny, but rather a convicted storyteller that says something a bit more light-hearted at the end of his diatribe so we all awkwardly laugh to release the tension. He mentioned how important it was to do something nice for black people that was unexpected, just to do it...Instead of doing things towards black people that aren't nice, that wasn't expected...Powerful.

This is brilliant and needed on many levels. Case in point, my 6 year year old son Carter? I have trouble connecting with him. Oh sure, we can talk Fortnite all day long, but anything else is surface. School, sports, video games. Yesterday, I asked him how Kindness Week is going...and the kid didn't stop talking...

My point is not to put the "My kid is an honor roll student" sticker of pride on this post, but rather to prove a point. Being kind is addictive. Being kind is a good drug to be on. Being kind IS a conspiracy...And the conspiracy has been proven to be as true as the Lochness Monster, fake moon landing, and..well, like I said..no more politics.. Have and will be proven false.

Show it in any way you can, but step out of your bubble and do something for someone. Not to relieve guilt, but because it snowballs. Pay it forward...Coffee is great in the Starbucks line, but who do you know that needs that shot of caffeine in other ways?

All my best as you figure out life and the relationships in it.