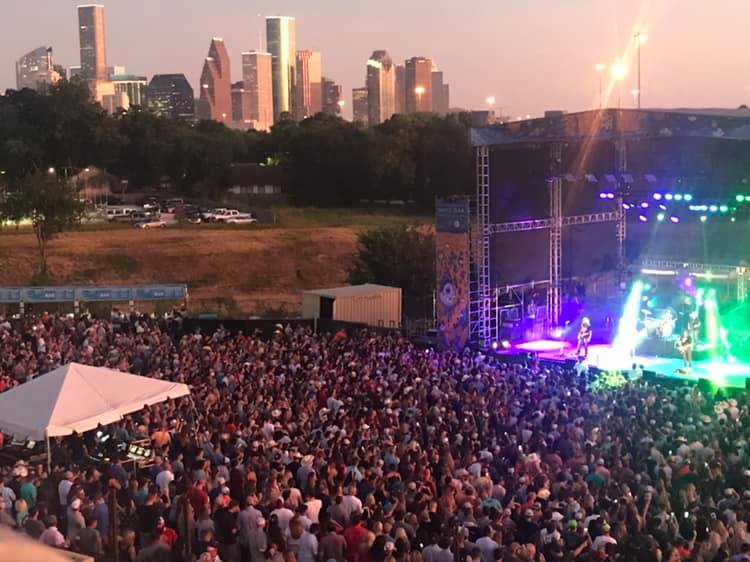 Let's be real, we're all missing live concerts. The feeling of holding an ice cold beverage while anxiously waiting to hear the live performance of the artist of the evening and then the first notes of the first song and excitement that kicks off when they step on the stage and everything else except the traffic of trying to leave is something to be missed and craved. For me, live music has been a part of my entire life. When I was a kid, I wanted to be on stage performing but as an adult I have had a career that put me on stage to introduce acts and play music on the radio.

I officially landed in Houston in April of 2014 and began working with 100.3 The Bull in a part-time capacity. Little did I know, the part-time capacity would evolve into a greater role than I'd ever held in my life. I became the intermediary between Country Music's biggest stars in Country Music's biggest market on the best radio station in Houston! This came with much more than just talking on the microphone between songs and trying not to press the wrong buttons while doing it; however, at the time I had no idea.

Within a couple of weeks, momentum had gained and my evolution began. Without going through all of the details because that would deviate from the point of this blog..is that Country Music concerts were about to become a very real part of my social life. Concert after concert after concert were schedule in and around Houston and some had 12 people and some had 12,000 people and some had 80,000 people but they were always happening. At these concerts, I met thousands (or dozens) of people and witnessed the joy the artist's music brought to their lives. It enriched the important fibers of what they deemed THEM. These songs spoke to a part of their being that nobody else had ever been able to so eloquently depict and they were getting to see it live instead of only in their imaginaiton. This is a powerful connection and for me, whether I was a major fan or casual fan of the artist, I'd be a fool to not appreciate the moment unfolding.

It's been since March and the night I saw Chris Young perform on the RodeoHouston stage that I was at a real, live concert. This has put a hole in what I considered normal.

As I've been unable to be at the concerts helping to usher in the experiences of fan and artist..I can only imagine that the feeling is the same for the artists and then some. Much of their entire existence is built upon this experience. Sure, they can release music but it's the real life interaction that drives them to continue, I'd like to believe.  When I looked through the nominations..I was instantly rewarded with an overwhelming sense of gratitude for the times I have experienced and it's completely washed out any feeling of missing out that I thought I should feel. I looked through these names and remembered all of the great times with each of them that I've been lucky enough to experience.

In the last 6 years, many of the artists who were nominated for awards have been in our cookoff tent, at our Ten Man Jam shows, in a Private Bull Ride in our Verizon Artist Lounge or private performances for a few members of the staff as the artist was very, very new at the time. Then, I thought about all of the listeners like you who have been a part of all of these experiences, also.

While we may be experiencing a bit of unfulfilment because of the lack of access to see our favorite Country Stars live in-person, we have had some REALLY great times in the past and you can bet your bottom dollar that when things get back to the way they were as far as concerts are concerned, they're inevitably going to be more fantastic than our wildest dreams. Remember, the bad times are never as bad as they seem and the good times will always be far greater than we can imagine.

Here's a trip back with some of this year's nominees that I've been lucky enough to meet or interview: