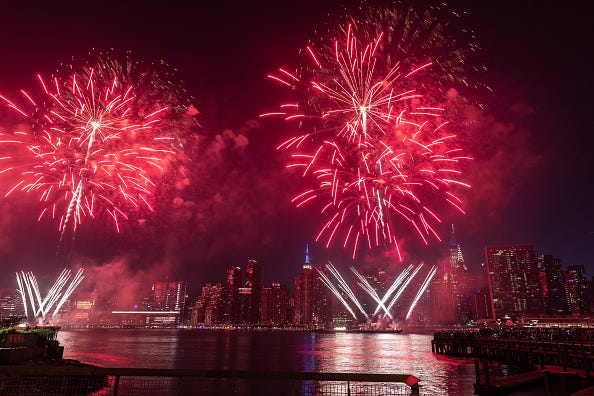 The 4th of July is one of the most widely celebrated holidays in America and for good reason! This is the day we celebrate our independence and freedom from tyranny. Our forefathers went to bat in the biggest way to start a country that was free to worship, live and grow without it's European counterpart.

The day is synonymous with hot dogs, burgers, family cookouts, fireworks and celebrations but what are some things you maybe never knew about 4th of July? I looked it up!

2. The declaration of Independence was actually signed on July 2nd but it wasn't completed until July 4th and the final signature didn't actually hit the pad until August!

3. When the Declaration of Independence was signed only 2.5 million people lived in the nation. We now boast a population of well over 300 million! That's a lot more hot dogs than they originally planned on!

4. The Liberty Bell rings 13 times every July 4th in honor of the original 13 colonies that became our country! Yes, the bell with the crack still rings!

Now, you can be the most well versed July 4th historian in the family; unless, you live with a History teacher. Happy Birthday, America!