The Carolina Panthers haven’t closed the door on bringing back former NFL MVP Cam Newton for the 2022 season, but he may have to humble himself to continue his career.

According to Jonathan M. Alexander of The Charlotte Observer, "the Panthers are open to signing Newton, but he would not enter camp as the starter, and would have to agree to a smaller salary."

It's hard to know exactly what the Panthers envision as "a smaller salary" for the former No. 1 overall pick. The Panthers guaranteed Newton $4.5 million with a $1.5 million roster bonus when they brought him back last November.

Newton, who recently turned 33, probably realizes he will have to compete for playing time if he wants to continue his career. But it's hard to imagine having him in your organization -- especially if your organization is the Panthers -- and not having him start. Even if Newton is willing to be a backup to start the season, he's a larger-than-life figure, both figuratively and literally. If Matt Rhule and company decided to start Sam Darnold or Matt Corral over Newton, it would seemingly be setting them up to fail if arguably the greatest player in franchise history was still on the sideline hoping for an opportunity.

The three-time Pro Bowler is at a strange point in his career -- he's thrown more interceptions than touchdown passes over the last two years, but remains an elite threat on the ground. Between his one season with the New England Patriots and his return to the Panthers last year, Newton tossed just 12 touchdown passes to 15 interceptions. However, he still rushed for 17 touchdowns over that period. Would Newton be willing to be used in a role like what Taysom Hill or Marcus Mariota were over the past few years? Probably not, he's had legitimately great stretches as an NFL quarterback. But it's fair to wonder if he's still capable of performing at that level anymore. 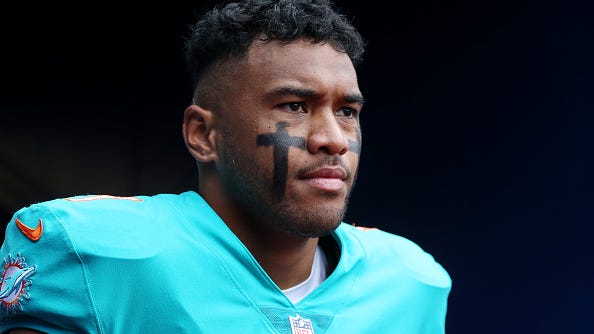 Chris Simms ranks Tua Tagovailoa as No. 29 quarterback in NFL