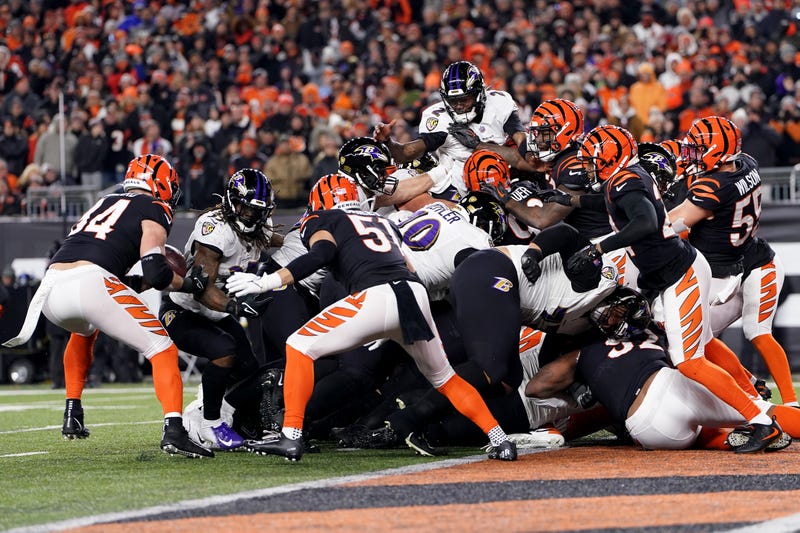 Tyler Hubbard scoops up Tyler Huntley's fumble for an eventual touchdown as the Bengals beat the Ravens, 24-17, in the NFL's Wild Card Round on Sunday (Jan. 15). Photo credit Getty Images
By Adam Cheek

The NFL termed it "Super" Wild Card Weekend as the playoffs got underway this past weekend, and super it was.

It featured two upsets -- the Giants over the Vikings and Jaguars over the Chargers -- alongside the Bills and Bengals barely winning games they were projected to run away with, as well as blowout victories for the 49ers and Cowboys.

Adam Epstein echoed the sentiments of many as he recapped the weekend on Tuesday (Jan. 17).

"I truly feel like this was maybe the best weekend of NFL playoffs we've had in 10 or 15 years," he said. "In the span of 36 hours, you had the third-largest postseason comeback in NFL history with the Chargers against the Jaguars, and the Jags came up big in the fourth quarter.

"You had one of the biggest upsets with the Giants over the Vikings, and then you had two huge favorites in the Bengals and Bills nearly lose their home field advantage."

He turned to the upcoming divisional round as well.

"Going into it, I thought the Eagles' biggest task was going to be the 49ers, but I truly think Brock Purdy looked beatable [...] like he had a ton of playoff nerves. And San Francisco's defense gave up a ton of big plays, including a deep pass to DK Metcalf."

But it's a different NFC East team he has his eye on.

"Dallas is the team that I think could make a run at this," he said. I truly feel like this team is built for the playoffs based off of their roster [with] [...] so many different playmakers.

"If Dallas could continue to run for 125-plus and mix in some throws and Dak limits the turnovers and sacks [...] that's a recipe for them to be successful in these playoffs and make it to the Super Bowl. [...] They're the team that scares me most right now in the NFC."

Turning to the AFC, he commented on the Bengals and Bills' near-losses at home while heavily favored and against a backup quarterback

"I don't know what it is about this team, but they always seem to be clutch -- and yet at the same time, they just snuck by that Ravens team.

"[...] I look at this BIlls team and [...] going into this, they were my Super Bowl favorite, because I truly felt like this was a team that had everything you need to win a Super Bowl. [But] this Bills defense has so many issues, so many injuries. They're missing Damar Hamlin [...] the football player."

If nothing else, Super Bowl predictions around the NFL world might've changed dramatically.

Listen to more of the segment below.