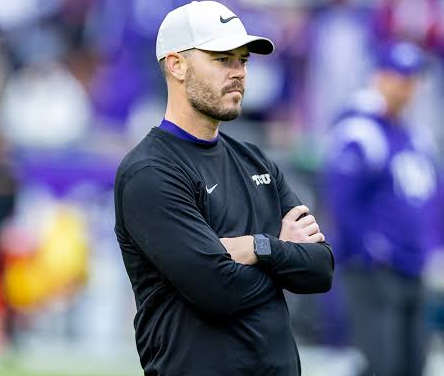 On Thursday, just hours after Clemson Head Coach Dabo Swinney announced that OC Brandon Streeter would not be back, reports surfaced that Clemson was going to hire Garrett Riley. The pen was put to paper and the move was made official on Friday after a deal was reached.

Riley will make $1.75 million annually and will receive a $300,000 signing bonus. He also has incentive bonuses available in his contract , if certain milestones are reached. The move puts Riley in the top 5 for highest paid Offensive Coordinators in the country. Georgia's Todd Monken is the highest paid just over 2 million per year.

“I am super excited to welcome Garrett and Lindsay Riley and their two precious sons to the Clemson Family,” Swinney said. “Garrett has an incredible track record. His body of work — including this past season when his ninth-ranked scoring offense helped TCU transform from a five-win team into a 13-win national championship game finalist in their coaching staff’s first season — speaks for itself… I know all of Clemson will help welcome the Riley family into the Clemson Family with open arms.”

Riley joins Clemson from TCU, where he served as Offensive Coordinator/Quarterbacks Coach in helping lead the Horned Frogs to a 13-2 record, a Fiesta Bowl title and a berth in the College Football Playoff National Championship Game in 2022. In December, he was honored with the Broyles Award, presented annually to the nation’s top assistant coach.

“I am honored and excited to join the Clemson Family,” Riley said. “The opportunity to join a program with such a rich tradition and renowned culture was simply too good for me to pass up. I have always had a tremendous amount of respect for Coach Swinney and the program he has built. I am appreciative of the faith that he, Graham Neff, Clemson’s administration and the entire Clemson community have placed in me.”

Full comments from Swinney and Riley are included at the bottom of this release.

Riley’s tutelage led quarterback Max Duggan to a multitude of honors for his play in 2022, including the Davey O’Brien Award as the nation’s top quarterback, a runner-up finish in Heisman Trophy voting, All-America honors from several selectors and Big 12 Offensive Player of the Year.

Prior to his tenure at TCU, Riley served two seasons at SMU from 2020-21 in the same role. His offenses with the Mustangs finished in the top 15 in the nation in both scoring offense and total offense in both seasons and helped garner postseason accolades for quarterbacks Shane Buechele and Tanner Mordecai.

Prior to his time at SMU, Riley spent the 2019 season as the running backs coach at Appalachian State. The Mountaineers compiled a 13-1 record including a Sun Belt Conference title and a win in the New Orleans Bowl. Riley mentored Darrynton Evans to Sun Belt Offensive Player of the Year honors as Evans totaled 1,740 all-purpose yards, including 1,250 rushing yards and 20 touchdowns. Evans would later become a third-round selection of the Tennessee Titans in the 2020 NFL Draft.

Riley spent three seasons at Kansas from 2016-18 in various capacities. He joined the Jayhawks as an offensive analyst in 2016 before transitioning to an on-field role as the team’s quarterbacks coach in 2017 and its tight ends/fullbacks coach in 2018.

Riley made his FBS debut at East Carolina from 2013-15. After spending his first two seasons as a graduate assistant, he was promoted to Outside Receivers Coach in 2015. That year, East Carolina’s Zay Jones caught 98 passes for 1,009 yards as part of the receiver’s FBS-record 399 career receptions.

Riley’s coaching career began in 2011, when he served as a passing game assistant and quarterbacks coach at Roosevelt High School in Lubbock, Texas. He moved to the collegiate ranks in 2012, helping rebuild an Augustana (Ill.) College program that was 2-8 prior to his arrival into a 5-5 squad that improved its rushing total by 500 yards during his season as the program’s running backs coach.

A 2012 Texas Tech graduate with a degree in general business, Riley played quarterback for the Red Raiders in 2008 and 2009 before transferring to Stephen F. Austin for the 2010 season. Riley saw action in 11 games in helping the Lumberjacks to a Southland Conference championship and a 9-3 record under head coach (and former Clemson defensive tackle) J.C. Harper.

Riley, 33, was selected to the American Football Coaches Association 35 Under 35 Coaches Leadership Institute in 2021. Riley is expected to be formally introduced in a press conference following the conclusion of his duties during the NCAA contact period for recruiting in January. Details on his introductory press conference will be finalized and made public at a later date.