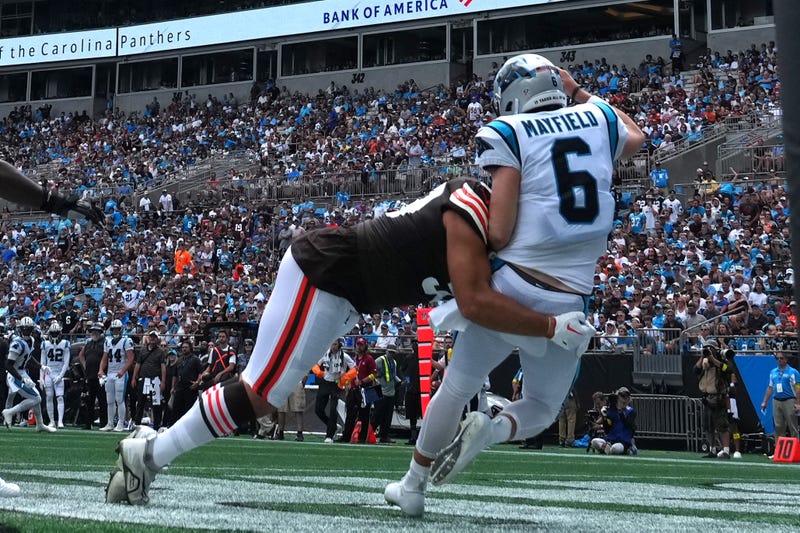 The Carolina Panthers dropped a heartbreaker on Sunday in their season opener. The Panthers comeback effort was thwarted when Browns Kicker Cade York hit a 58 yard FG with 8 seconds left in the game.

The Panthers trailed by as many as 13 points during the game and never led until 1:13 left in the game. Former Georgia star Nick Chubb was a big part of the Browns offense on Sunday, he had 141 rushing yards on 22 carries for an averaging of 6.4 yards per carry.

Neither team could get anything going on offense in the early going, the game was scoreless after the 1st Quarter. Kareem Hunt was a difference maker on offense, specifically in the 1st half. Hunt scored on a 1 yard TD pass from Jacoby Brissett with 10:49 left in the 2nd Quarter. He then scored on a 24 yard run with less than 5 minutes in the 1st half, to put Cleveland up 14-0.

The Panthers would then answer and get on the board with a TD drive. Carolina got a 1 yard TD run from Christian McCaffrey that capped a 6 play 75 yard drive that took 2;49 off the clock. QB Jacoby Brissett then engineered a late scoring drive. Cleveland Kicker Cade York hit a 26 yard FG right before the half. It was one of four field goals for York on the day. Cleveland took a 17-7 lead into the break.

The Browns struck 1st in the 2nd half, they would get the 2nd FG of the game from York. This one was from 34 yards out and gave Cleveland its largest lead of the game at 20-7. The game would go to the 4th quarter with Cleveland leading by that margin.

In the 4th, the Panthers would put together a valiant comeback effort. Carolina would cut the lead to 20-14 when QB Baker Mayfield scored on a 7 yard TD run. That run capped a drive of 11 plays and 75 yards that took nearly 5 minutes off the clock.

The Browns then put together an even longer, methodical scoring drive. That drive of 10 plays and 57 yards that took over 6 and a half minutes, was capped off with a 36 yard Field Goal from York. The Panthers answered immediately on a 75 yard TD strike from Mayfield to Robbie Anderson with just over 6 minutes left in the game. That score cut the Cleveland lead to 23-21, Anderson had 5 catches for 102 yards and a TD.

Carolina then too their first lead of the day, when they put together a late drive. The Panthers put together a drive of 64 yards on 7 plays that took just a minute off the game clock. Carolina took the lead at 24-23 when Eddy Piniero hit a 34 yard FG with 1:13 left in the game.

The Browns got the ball back and would gain enough yards to set up a long field goal attempt. York knocked down a 58 yard field goal with 8 seconds left to win the game for Cleveland, 26-24.

The Panthers are back in action next Sunday, as they travel to New York to take on the Giants. That game is set for a 1 PM kickoff, you can hear every Panther game all season long on Classic Rock 101.1