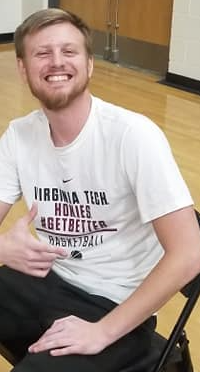 At 24 years old, Matt Rowland has his first varsity basketball head coaching job, before he can legally rent a car. Rowland was named head coach of the West Oak Warriors Boys Basketball program earlier this year, after former Coach Ed Geth resigned from the position.

Rowland was a standout player at Walhalla High School earning All-Region and All-State honors. He then went on to play at Erskine College. Following that, he searched for a Grad Assistant opportunity at the college level. However, he would end up going to Crescent High in Anderson County as an Assistant. While at Crescent, he was reunited with Coach Cory Drennon who was an assistant at Walhalla, during Rowland's playing days.

Rowland served as an Assistant Coach with the Seneca Boys program, which won Region 1 3A and made the 3rd round of the playoffs, before losing to Keenan. Rowland was hired earlier this year, in a giant leap of faith by the West Oak athletic program, given his age and just a couple of years in coaching at the high school level.

On Monday night, he made his debut as the youngest Varsity Boys Basketball Coach in South Carolina. The debut worked out well for Rowland, as West Oak defeated Franklin County, Georgia , 55-51. Franklin County is coached by Jason Shaver, a Seneca native and former assistant there. He has been at the helm of the Lions program for several years now and had consistent success there.

Monday night's meeting was poetic in some ways, the two coaches are familiar to each other and to me. I have known Jason Shaver for over 20 years, I can remember when he was a young assistant at Seneca and later Franklin County. The game was a matchup of a former young bright assistant coach, who now is a proven veteran and a upstart young coach looking to make his mark on a program that has been down in recent years.

Rowland has implemented a 1-3-1 zone trap and his team used it to bother the smaller guards of Franklin County on Monday. West Oak was led by Anson Burgess who had a game high 21 points, Lucas Towe added 16 in the effort. The game was part of a tip off tournament at West Oak.

While, Rowland was his debut and his team won their opener, they will have no time to celebrate. The Warriors host 4A power Westside Anderson in the Championship Game of the Warrior Invitational tonight (Tuesday) at 730 PM.