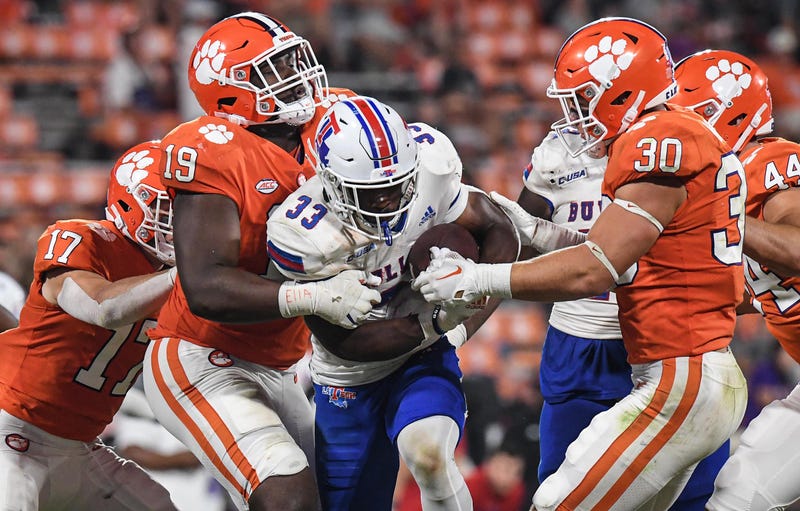 It has been an emotional rollercoaster this week for Clemson Football. On Saturday night, the Tigers paid tribute to Ella Bresee and played without her big brother and stand out D-lineman Bryan Bresee. He missed Saturday's game after 15 year old Ella died earlier this week from brain cancer. Clemson started somewhat slow and didn't put together 4 quarters against Louisiana Tech, but that can be very difficult in moments where real life is so much bigger than football.

The 48-20 win over Louisiana Tech is Clemson's 36th straight home win, which is the nation's longest home winning streak. The win also makes Clemson 55-1 at home since 2014, which is a national best. It also gives Clemson it's 18th straight win at night in Death Valley, a streak that dates back to the 2013 season. Florida State led by Jameis Winston is the last team to beat Clemson in a night game in the Valley.

The Clemson defense playing without Bresee made LA Tech one dimensional completely taking away the run. It's often that you see a Power 5 team playing an inferior opponent have a decided advantage in rushing yardage, however this was an extreme example. Clemson rushed for 280 yards on the night, thanks to Will Shipley's 139 yards and 2 TD's on 12 carries. However, the run defense for the Tigers allowed just 6 yards on the ground on 21 Tech carries, that's an average of .3 yards per tote.

Clemson's offense was sluggish in the 1st half, they managed just 13 points in the 1st half and led 13-6 at the break. Those 13 1st half points came on Will Shipley's 1st TD run of the game and two Field Goals from B.T. Potter. LA Tech got two field goals of their own in the half from Jacob Barnes.

Clemson's offense would find some rhythm in the 3rd quarter. They would outscore Louisiana Tech 21-0 in the 3rd quarter with TD drives in the frame. Will Shipley would get his 2nd rushing TD of the night with a 32 yard to pay dirt. Phil Mafah would then score on a 4 yard TD run. That capped a 90 yard, 14 play scoring drive that took nearly 7 minutes off the clock. Clemson then closed the 3rd frame with a 32 yard DJ Uiagalelei TD pass to Beaux Collins. Clemson would take a 34-6 lead after three quarters.

Louisiana Tech would make things sort of interesting in the 4th, as they scored on two straight drives to cut the Clemson lead to 14 at 34-20 with 9:30 left in the game. Clemson would then answer by scoring on two straight possessions to seal the win at 48-20. The Tigers got a 19 yard TD pass from Uigalelei to Antonio Williams. RB Kobe Pace then became the 3rd Tiger to score a rushing TD on the night when he punched it in from 3 yards out.

Clemson had 521 yards of total offense, 241 passing and 280 on the ground. LA Tech had 317 total yards, 311 of those coming through the air. Clemson's defense forced 4 turnovers and the Tigers were +3 in turnover margin. D-End Kevin Swint had a fumble recovery, Malcolm Greene , R.J. Mickens and Jeremiah Trotter Jr. all had interceptions on the night.

D.J. Uiagalelei was 17 of 29 passing for 221 yards and a TD, he ran for 62 yards on 9 carries. LA Tech QB Parker McNeil went 23 of 42 for 311 yards, a TD and two picks. Freshman Antonio Williams is could emerge as playmaker in a Clemson WR unit that has been lackluster thus far. However, the Irmo native and Dutch Fork High product is starting to find his way as a true freshman after his 1st TD catch of the season on Saturday night.

The competition will take a step up for the Tigers this week. They travel to Winston-Salem to take on 19th ranked Wake Forest on Saturday. The Demon Deacons are 3-0 on the season thus far, although they survived a scare from Liberty winning 36-35 in a nail biter on Saturday. Clemson is still looking to put together 4 quarters of high level play, something they haven't done yet this season. That game is set for a high noon kickoff and will be nationally televised on ABC.