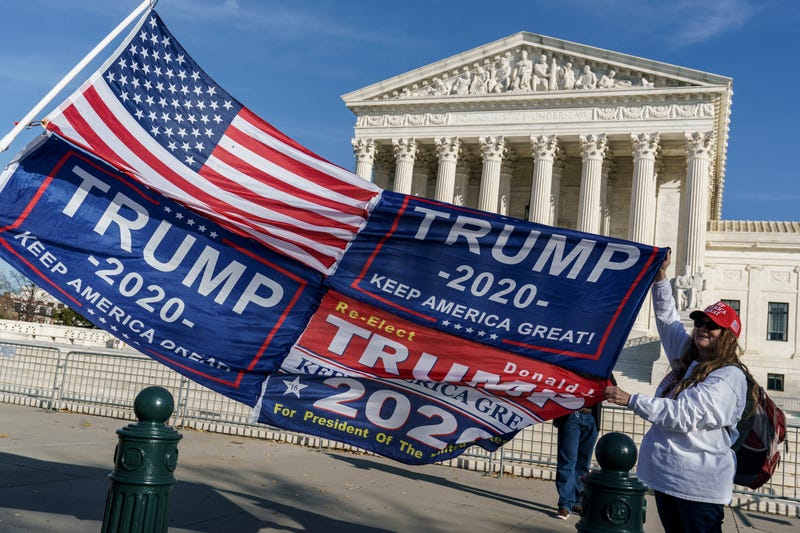 Photo credit Kathy Kratt of Orlando, Fla., displays her Trump flags as she and other protesters demonstrate their support for President Donald Trump at the Supreme Court in Washington, Friday, Dec. 11, 2020. (AP Photo/J. Scott Applewhite)
By The Associated Press

WASHINGTON (AP) — The Supreme Court on Friday rejected a lawsuit backed by President Donald Trump to overturn Joe Biden’s election victory, ending a desperate attempt to get legal issues rejected by state and federal judges before the nation’s highest court and subvert the will of voters.

Trump bemoaned the decision late Friday, tweeting: “The Supreme Court really let us down. No Wisdom, No Courage!”

The high court's order was a stark repudiation of a legal claim that was widely regarded as dubious, yet embraced by the president, 19 Republican state attorneys general and 126 House Republicans.

Trump had insisted the court would find the “wisdom” and “courage” to adopt his baseless position that the election was the product of widespread fraud and should be overturned. But the nation's highest court emphatically disagreed.

Friday's order marked the second time this week that the court had rebuffed Republican requests that it get involved in the 2020 election outcome and reject the voters' choice, as expressed in an election regarded by both Republican and Democratic officials as free and fair. The justice