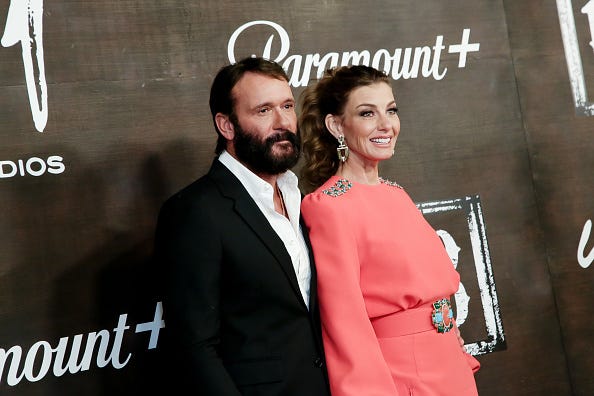 Tim McGraw and Faith Hill are having a blast working on "1883," the prequel spinoff to Paramount+'s "Yellowstone," but Tim admits that even though he's pretty confident on a horse, there's still a lot that goes on behind the scenes for those iconic shots.

“I mean, I grew up riding horses, but being on the wagon was something that was really intense and really took a lot of work," he says in a statement from his label. "And Faith spends the most time drivin’ the wagon during the show, so she spent a lot of time doing that to where she’s pretty expert at it now.

"I mean, that’s a harder deal than people think it is to drive a wagon," he continues. "Those things can get really serious really quickly, especially when crossing the river. It’s just so treacherous and so dangerous. I mean, you never knew where the holes were in the river. You never knew how deep it was. Just about every scene I shot with my horse he was trying to throw me in the middle of the river. I had one scene where my horse is raring up. Its hooves are slashing in the air, and my hat falls; I catch it and put it back on.

"It shows the chaos and the danger and the precarious situation that everybody was in.”