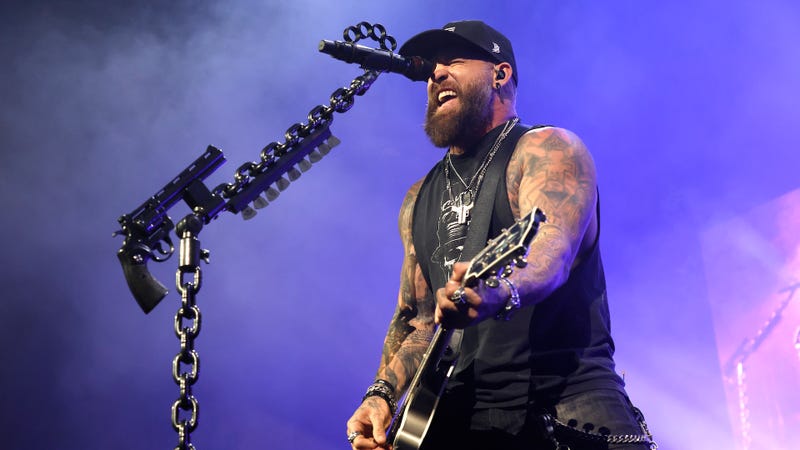 Brantley Gilbert’s new single “Heaven By Then” feat. Blake Shelton and Vince Gill might have a slow and sentimental feel, but Gilbert says the lyrics came from a rowdy night out with the boys.

LISTEN NOW: Brantley Gilbert shares all the details of the writing room when he wrote “Heaven By Then”

After a night out karaoke-ing in Texas with some of his songwriting buddies, including HARDY and Taylor Phillips, Gilbert said they all came home feeling good and the song just happened.

“We got back, it was two or three in the morning and the guys that drink had been drinking a little bit, and the Willie Nelson folks, like me, had spent a little time with Willie and we were all hanging out on the porch and HARDY picks up a guitar,” he said. “Any time that happens, you try to be close — good things usually happen when he picks one up.”

He continued, “Taylor Phillips was saying something, just in regular conversation like, ‘Shoot, you know what? I hope I’m in Heaven by then” and HARDY slammed his fist on the table and he stood up and was like, ‘TAYLOR! Why in the hell would you say that in a room full of eight writers?’ We all ended up writing it.”

In addition to all the songwriters, the song turned into even more of a group effort as Brantley asked the legendary Vince Gill and fellow Country artist, Blake Shelton to join him on vocals.

“I’ve looked up to both those guys. Blake… when I came on the scene years ago, I was a little rougher than I am now,” he shared. “Back in my drinking days, I was a little different and it never bothered Blake, or Vince for that matter,” he said with gratitude for both artists.

“To be completely honest and transparent, I have to be respectful to the folks in the recovery community that are absolutely sober,” he said. “I have to be careful with the definition of sober — I’m California sober if that makes any sense. I’m a Willie Nelson fan,” he stated, implying he still smokes marijuana.

Hear more about Brantley’s new music, sobriety, full head of hair and tour with Five Finger Death Punch and Jelly Roll by listening to his conversation with Audacy’s Rob + Holly above.