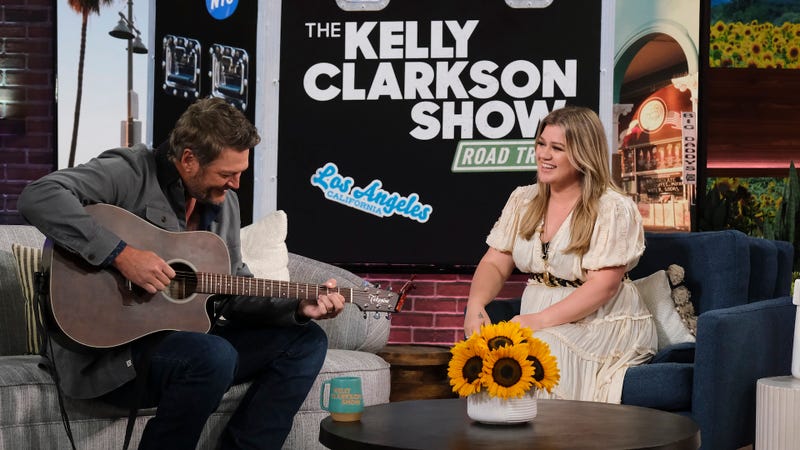 Kelly Clarkson welcomed fellow The Voice coach, Blake Shelton to her talk show this week ahead of the singing competition’s 22nd season.

Per usual, the pair spent time roasting one another and talking smack, but they also brought their voices together for a special duet. During Shelton’s appearance, the 56-year-old broke out his guitar to perform his debut single from 2001, “Austin,” and Clarkson couldn’t help but sing along.

Shelton can be seen as a coach on the new season of The Voice, which kicked off Monday night. He are joined by fellow coaches John Legend, Gwen Stefani and first-timer, Camila Cabello.

“Camila has done a good job,” Shelton said, during his time on The Kelly Clarkson Show before telling Clarkson, “nobody’s you. There’s only one Kelly Clarkson, but there is one person we found who can talk as much as you, and that’s Camila.”

“I know, I met her. We had to edit down our interview,” Kelly laughed. “She’s passionate, she likes talking. She’s really sweet. I love her, though, for the show. I think it’s really cool.”

Shelton took the opportunity to take one final dig at Clarkson replying, “Unlike you, when she talks, she makes sense.” What a friendship these two have!

In addition to welcoming Blake to her show this week, Clarkson also celebrated getting her own star on the Hollywood Walk of Fame. American Idol season 1 judges, Randy Jackson, Paula Abdul and Simon Cowell were there as well to congratulate Clarkson on her accomplishments twenty years after being crowned the season 1 winner.