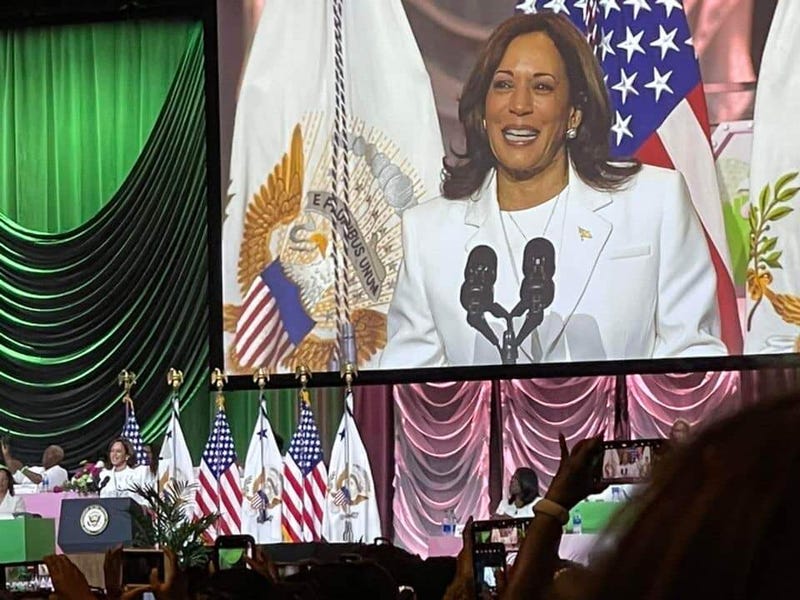 "As a 35-year member of Alpha Kappa Alpha Sorority, Inc. I was brought to tears," says Pam Scott of Atlanta, "I felt honored to see and hear Vice President Kamala Harris speak." Harris came to Orlando Thursday to address the organization's national convention. 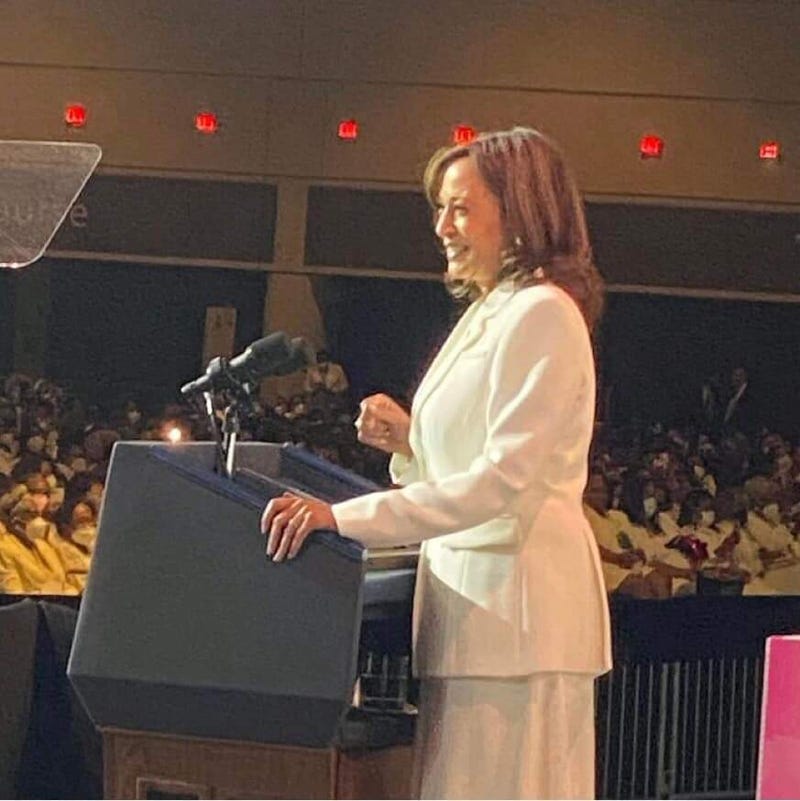 Thousands of members, dressed in white, watched in person and virtually as VP Harris, wearing a white skirt suit, was greeted with thunderous applause and a standing ovation inside the Orange County Convention Center. Harris joined the sorority while a student at Howard University.

AKA is lead by Dr. Glenda Glover, the first female President of Tennessee State University and Vice Chair of the White House Board of Advisors on Historically Black Colleges and Universities (HBCUs). At the start of her speech Harris acknowledged Glover saying "you have been a tremendous friend to me, and sister, over so many years, and a phenomenal leader of our sisterhood. So I want to thank you in front of everyone for all that you have done and for your commitment, your enduring commitment to exemplify excellence."

"The story she shared about why she became an AKA is what stands out for me," says Neva Jones from Atlanta. Harris spoke of her 'Auntie Chris' hosting a
reception years ago for one of the founders of AKA Norma E. Boyd. "She was then signing her book, “A Love That Equals My Labors.” And she signed a copy: “To Kamala, with love, Norma E. Boyd.” And I will tell you, I proudly display the signed copy of that book in my West Wing office in the White House. Yes, I do. The legacy lives on."

While thanking her sorority sisters for electing she and President Joe Biden to the White House in 2020, Harris acknowledged some of the changes they are fighting for won't be easy to achieve. "There are, as there have always been, forces that stand in our way. Forces that oppose even the most -- on this issue of gun safety -- even the most commonsense gun safety proposals. Forces that include extremist so-called leaders who, instead of expanding rights, work to restrict rights; these so-called leaders who, after we fought and marched -- members of our sorority being among the greatest leaders, fought for the right to vote -- these so-called leaders, right here in this state and in other places in the country, making it more difficult for people to vote!"

Harriet Stephens of Columbus, Ga, says Harris' speech "reminded us that we are all built for leadership." A retired U.S. Army Lt. Colonel, Stephens says "she reminded us that we have already reached great strides to make a change in our communities and in America. I am energized to get on the front line to do the work!"

"As the daughter of an activist and one who is always on the front lines fighting for the rights of the disenfranchised," Pamela Tillman of Charlotte N.C. says, "it did my soul well to see and hear my soror say 'I see you and I hear you and thank you'."

Jackie Simmons, a recently inducted member of Alpha Kappa Alpha from Houston, TX, says "20 years ago, at the 60th Boule' in Orlando, my mother brought her six week old baby girl to the conference. Now, 20 years later, as her Legacy, I witness Kamala Harris speak at the 70th conference in Orlando. This represents the endless possibilities the sisterhood brings and how future generations of Alpha Kappa Alpha woman will lead the way. I am honored to be a part of an occasion such as this!"

"It was absolutely magical," according to Judge Penny Brown Reynolds of Atlanta. "You could sense the pride from not only the Vice President, but the thousands of black women gathered in the room to hear her speak. Her speech provided a snap shot of how elections have consequences. For the first time in history, a sitting Vice President, who is a member of my sorority and a graduate of an HBCU, made the issues of black women and children a priority, not just in a speech but in an administration that has made it a priority in policy." Reynolds goes on to say about Harris, "She was gracious and fearless at the same time while speaking truth about voter suppression and civil rights stating that there is still work that remains to be done. We heard her clarion call. It was truly a moment I will not forget. We are all motivated to go vote!"