(670 The Score) Rookie Velus Jones spent the final minutes of the Bears' 20-12 loss to the Giants on Sunday pacing along the sideline at MetLife Stadium, regretting the muffed punt that cost his team the football and a potential game-tying drive.

Jones likely was muttering what every Bears fan was thinking. You’ve got one job, kid. Catch the punt, secure the football, get off the field.

Maybe Jones briefly took his eye off the ball.

Maybe he felt the pressure, in his NFL debut, of the Bears needing him to make a play to keep hope alive.

In the end, none of the emotions or excuses mattered and all the points are moot.

Don’t compound Jones’ mistake by making another one with your game analysis. Don’t fall into the trap of thinking Jones cost the Bears the victory by fumbling away that punt return with 2:13 left. Don’t exaggerate the impact of one play in a game full of regrettable moments.

Sure, that didn’t help, but the Bears lost to a beatable opponent because they couldn’t stop the run, couldn’t protect the quarterback and, as a result, never threatened the Giants with an NFL-caliber passing game. This game further revealed that the Bears have a roster full of players whose limitations outweigh their potential and a coaching staff longer on effort and intensity than imagination, an approach that will frustrate a fan base on days like Sunday. 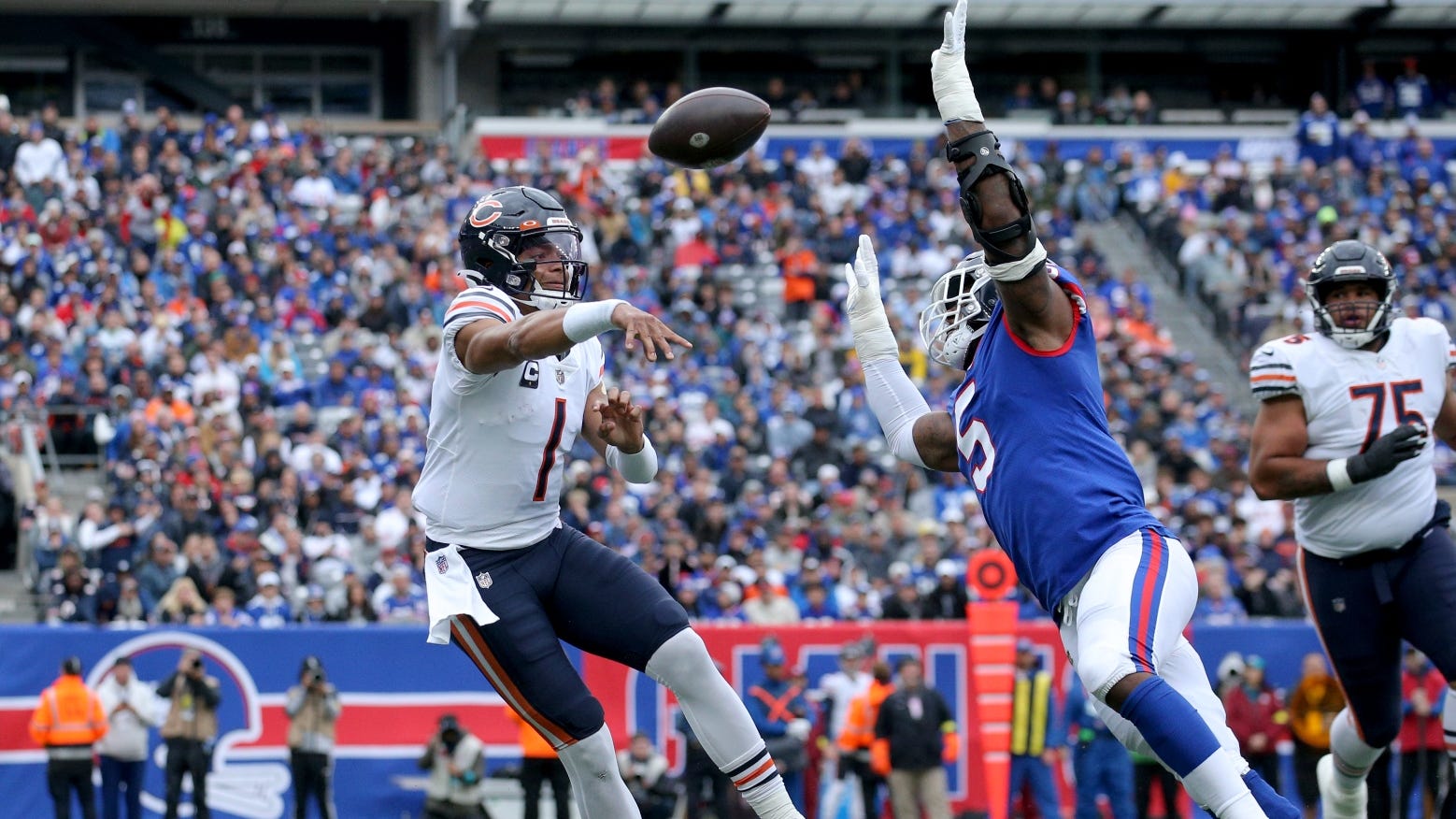 Bernstein: Bears live down to expectations

So the Giant takeaway isn’t that the Bears were a muffed fumble away from stealing a road win Sunday. The biggest impression is that this is a team still a long way from respectability almost one-quarter through the season.

Now 2-2, the most encouraging aspect of this Bears season remains the schedule.

Everything that happened Sunday as a result of the Giants running the ball wherever they wanted, however they tried.

Giants star running back Saquon Barkley, the best player on the field, carried the ball 31 times for 146 yards, but New York quarterbacks combining for 98 more on the ground hurt Chicago every bit as much. Daniel Jones, a magician with ball fakes, masterfully worked bootlegs and read-option plays for 68 rushing yards on six carries – two of which went for touchdowns. Jones regularly sucked in the defender responsible for contain by carrying out his fake, then sprinting to the edge and around the corner to make it a long day for Bears defensive ends. The Giants pulling a guard on bootleg runs confused the Bears until they adjusted at halftime.

When Jones left briefly in the second half with an ankle injury, 33-year-old backup quarterback Tyrod Taylor looked pretty young with 30 yards on three carries, the most clutch gain a nine-yarder on third-and-4 when he made Roquan Smith miss by spinning. It will be the highlight the Bears show Smith or his agent when arguing why he isn’t worth $20 million a season.

The Bears defense struggled getting off the field, giving up 262 rushing yards without ever forcing Jones to beat them with his arm. The most indicting example came when Jones hobbled back onto the field after Taylor got banged up and the Bears still couldn’t stop the Giants during three straight snaps out of the Wildcat formation. The Giants essentially told the Bears they were going to run the ball, dared them to stop it and then ran roughshod over the defense. That’s as troubling of a trend as any facing coach Matt Eberflus.

Even two of the most positive defensive plays provided teaching moments. Eddie Jackson intercepted his third pass in four games in the third quarter, a Taylor bomb that hung in the air forever, but it flipped the field in the Giants' favor. Jackson picked it off at his own 4-yard line and the ball was snapped from the Giants’ 35. No self-respecting defensive back will deny himself an interception, but the Bears went three-and-out on the ensuing series. Then Eberflus and defensive coordinator Alan Williams can reinforce the HITS principle in a film session while watching defenders stand and watch Taylor’s fumble lay on the ground before going out of bounds after an eight-yard run later in the third.

Neither play, though, will bother the Bears as much as their inability to slow down Barkley and Co.

As the Bears returned home Sunday night, the biggest debate around town became what will challenge them more this season: stopping the run or completing a pass?

Chasing answers to both questions will create as much consternation at Halas Hall as conversation around town.

This is how bad it is for the Bears' passing game: Justin Fields completed 11 of 22 passes for 174 yards and a 76.7 passer rating and it resembled progress because the bar is low enough to trip a squirrel. Fields finally completed a deep pass, a 56-yard beauty to Darnell Mooney that was his best throw of the season. Another completion to Mooney across the middle on third down came with accuracy and authority often lacking. When Fields rolled out, he looked freer and more comfortable. But too often again, Fields appeared to quickly tuck and run instead of point and throw, an understandable reflex considering how quickly pressure forces him out of the pocket.

“We’ve got to be more consistent, whether it‘s me, the offensive line or the receivers," Fields told reporters postgame. “Just as a whole we could’ve been better."

Too many breakdowns on the offensive line resulted in giving up six sacks to a Giants defense that the Bears expected to blitz more than it actually did. The loss of left guard Cody Whitehair hurt continuity, forcing Lucas Patrick in his place, and the most consistent pressure appeared to come up in the middle, which could make it a long film session for center Sam Mustipher. Shaky protection forced Fields into running seven times for 52 yards, including several escapes that included a patented spin move quickly becoming his trademark.

Eberflus saw “positivity” in the passing game related more to the Fields-to-Mooney connection than pocket protection, but beauty is in the eye of the beholder, who apparently is wearing Bear goggles.

“I thought it improved," Eberflus said of the passing game. “I thought (Fields) handled (the blitz) relatively well. I loved the way he was throwing the ball down the field."

Dante Pettis let his quarterback down by not coming down with a catchable pass that Fields needs his receivers to nab. Offensive coordinator Luke Getsy also invited scrutiny with a game plan as conservative as a gray suit, hardly showing the kind of faith in Fields that Eberflus expressed postgame. Example: The Bears faced third-and-15 at the Giants’ 28-yard line late in the first half, and Getsy called the third tight end screen of the game to Cole Kmet, who gained six to set up one of kicker Michael Badgley’s four field goals.

If the Bears coaching staff truly trusted Fields, a deeper shot downfield made sense in that situation. At some point, hopefully soon, Fields must offer the Bears more reward than risk. Perhaps Getsy’s game plans lack ambition because he recognizes what everybody else sees, a nondescript receiving corps trying to help an unproven quarterback running for his life behind a young offensive line full of overmatched young players. Sunday was the latest reminder that Getsy isn’t in Green Bay anymore -- but likely not the last one.

Not much else happened offensively for the Bears, in terms of significance.

Eberflus provided plenty of fodder with his decision to punt on fourth-and-2 from his own 45 with 3:15 left while trailing 20-12. That’s as unambitious and conventional as you will see from a head coach in today’s NFL. Here were the Bears, who had yet to shut down the Giants running game, giving them the ball back to run out the clock down one score. Yet it nearly served its purpose. The Bears stuffed Barkley three straight times and 2:13 remained when the Giants punted to Jones.

“I thought that was a good operation there," Eberflus said. “We were going to have one timeout (left) at midfield."

If only Jones had done anything but muffed the punt at the Bears’ 34.

Yet, after Graham Gano hit the left upright to miss a 37-yard field-goal attempt with 17 seconds left, the Bears still believed in miracles until their last, desperate play ended after five laterals and four fumbles.

The final play was football theater of the absurd, a bunch of Bears going nowhere fast, throwing the ball around with no clear path to success.