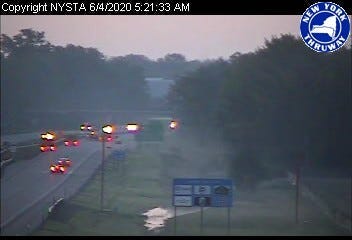 BUFFALO, N.Y. (WBEN) -  Two people have died after a wrong way driver traveling westbound on the 90 East collided with another vehicle after 1am Thursday morning.  State Police say 32-year old Tatiana G. Walker of Buffalo was driving a 2011 Ford Escape in the wrong direction, hitting head on a 2012 Toyota Corolla operated by 23-year old Julia V. Hunt of Tempe, AZ.  Both women were declared dead at the scene.  The incident was called in at 1:03am.  Six minutes later, Troopes came upon the crash scene along a stretch of the Thruway that runs through Lancaster.  Autopsies are being conducted at ECMC.

Early Wednesday evening, multiple tractor trailers were involved in a crash on the 90 East, closing a section from Exit 48A(Pembroke) to Exit 48 (Batavia.)  A previous accident has slowed traffic near Stafford in Genesee County.  State Police say 61-year old Christopher M. Schultz, 61, of Derby, NY was driving a Ryder Truck Rental tractor trailer  which failed to slow for stopped traffic.  He rear ended another tractor trailer that struck a third tractor trailer and that tractor trailer hit a fourth tractor trailer.  Schultz sustained serious injuries and was flown to Strong Memorial Hospital by Mercy Flight where he is currently listed in critical condition.  The other 3 drivers were not injured.  That stretch of the Thruway was closed for about ten hours beginning at 7pm and lasting until about 4am Thursday.