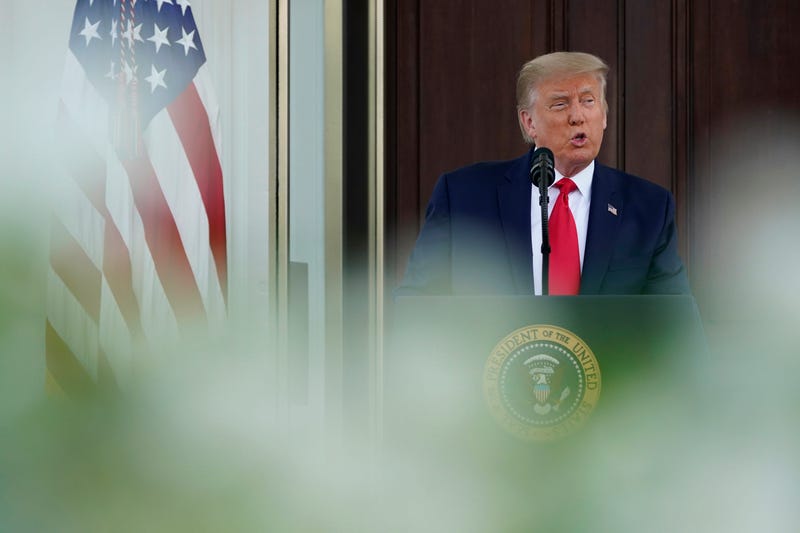 Photo credit President Donald Trump speaks during a news conference on the North Portico of the White House, Monday, Sept. 7, 2020, in Washington. (AP Photo/Patrick Semansky)
By The Associated Press

President Donald Trump and Democratic challenger Joe Biden are stepping up their campaign travel this week as the process of voting in the 2020 general election season accelerates. North Carolina began sending out absentee ballots last Friday and a handful of other battleground states — including Pennsylvania, Michigan and Virginia — are days away from offering early voting.

As this critical phase begins, Trump desperately wants to keep the focus on protest-related violence — and away from the pandemic. Even as coronavirus-related deaths continue to mount under his watch, with little national strategy, his team believes last week was one of the best of the year for his political prospects as he helped guide the nation's attention toward violent protests in Wisconsin and elsewhere that could boost his standing among white, suburban voters.

While Biden is maintaining his lead in many polls, the race remains competitive in the states that matter most this fall. Biden's allies in places like the Minneapolis suburbs and western Pennsylvania are calling on him to ramp up his on-the-ground presence.

With Election Day in sight, the bright glare of the presidential race intensifies the national focus — and makes the candidates' mistakes more dangerous — as each day passes.

How long can Trump ride 'law and order'?

Public safety was the dominant theme on the campaign trail last week as both candidates traveled to America's latest epicenter of civil unrest, Kenosha, Wisconsin. Trump's team believes the focus on protest-related violence is a winning issue for him, and he'll continue to ride it as long as he can, but it's far from certain that the issue will have the same resonance in the days and weeks to come.

Biden's team began the week by pushing back as vice presidential nominee Kamala Harris on Monday met with the family of Jacob Blake, the Black man shot several times in the back by Kenosha police last month.