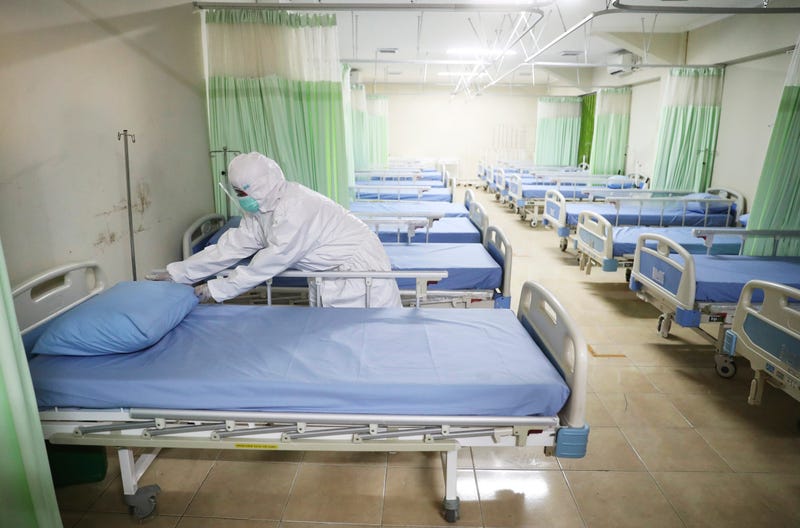 Photo credit A medics inspects makeshift isolation rooms at Patriot Candrabhaga stadium prepared to become a quarantine facility for people showing symptoms of the COVID-19 amid the new coronavirus outbreak in Bekasi on the outskirts of Jakarta, Indonesia, Wednesday, Sept. 9, 2020. While Indonesia has recorded more deaths from the coronavirus than any other Southeast Asian country, it also has seen by far the most fatalities among medical workers in the region, leading to concerns about the long-term impact on the nation's fragile healthcare system. (AP Photo/Achmad Ibrahim)
By The Associated Press

JAKARTA, Indonesia (AP) — While Indonesia has recorded more deaths from the coronavirus than any other Southeast Asian country, it also has seen by far the most fatalities among medical workers in the region, leading to concerns about the long-term impact on the nation's fragile healthcare system.

The tribulations endured by Indonesian healthcare workers are similar to others globally: long working hours, hospitals filled to capacity and a lack of resources like personal protective equipment.

Indonesia's government has been able to provide PPE to healthcare workers after an initial shortage that saw doctors wearing plastic raincoats while working. But other issues remain in the country, where more than 200 medical workers, mostly doctors and nurses, have died from the virus.

According to Dr. Halik Malik, spokesperson for the Indonesian Medical Association, coronavirus and non-coronavirus patients are often treated in the same healthcare facilities, increasing workers’ potential exposure to the virus. Only workers who are treating known COVID-19 patients are provided virus testing for themselves, he said, noting that results are often delayed.

“We are worried that if positive cases in the community continue to increase, there will be many cases that cannot be handled properly,” Malik said.

Indonesia on Tuesday surpassed 200,000 cases of the coronavirus, the second-highest tally in Southeast Asia after the Philippines, which has reported more than 241,000 infections. In all of Asia, Indonesia's death toll of 8,230 is second only to India, which has had over 73,000 fatalities.

At least 213 healthcare workers have died from COVID-19 in Indonesia, including 107 doctors and 74 nurses, according to the Indonesian Medical Association.

The Philippines, which has reported more than 3,900 deaths overall, has seen 33 of its medical workers die from the virus, second-most in the region. The only other Southeast Asian country with more than 100 overall deaths is Malaysia, with 128.

Indonesia also has one of the lowest numbers of doctors per capita in Southeast Asia, at just 4.27 per 10,000 people, according to the World Health Organization.

The deaths of so many of its doctors from COVID-19 will impact the country's healthcare workforce for years to come, said Nurul Nadia, a public health expert from the Center for Indonesia’s Strategic Development Initiatives, an organization that focuses on health.

And the spread of the virus is only getting worse across the vast archipelago nation of more than 270 million people.

According to the WHO, 66,420 cases were recorded in Indonesia in August alone, a 28% rise from July’s total. While a majority of the cases were in East Java province and Jakarta, Indonesia's capital, several other places have emerged as new hot spots. The true number of cases is suspected to be significantly higher, as Indonesia continues to have one of the lowest testing rates in the world.

Yet businesses across the country continue to reopen. Bali, one of the country’s largest tourism hubs, began welcoming domestic visitors on July 9. According to Bali Tourism Agency chief Putu Astawa, the island welcomed at least 78,000 domestic tourists in August. In Jakarta, many offices have reopened, contributing to a spike in cases in the sprawling city.

As a result of the spike in cases, hospitals are continuing to fill, leading to some becoming overcrowded. Isolation beds are now at 70% capacity in the country, “raising concern about the healthcare system’s capacity to cope with the increasing number of new cases every week," the WHO said.

Medical workers face other burdens for which there are no available statistics. They often work long hours, with no offer of psychological counseling, said Dr. Irman Pahlepi, who has worked in a COVID-19 intake center since March. The fear of exposure to the virus has also kept many healthcare workers away from their families, as they choose instead to stay in government-provided hotels.

Pahlepi, who spent most of the past five months living away from his newlywed wife for fear of infecting her, recently found out his wife is pregnant and decided to move back home to help care for her. But the decision doesn’t come without risks, he said.

“I’m getting more scared now, and getting sadder too," Pahlepi said. "I remember my family at home more than before. What if we get infected?”

Healthcare workers across Indonesia are facing other hardships as well. The secretary of the Legal Aid Agency of the Indonesian Nurses Association said that as of May 25, “330 nurses in government-owned or private-owned hospitals experienced pay cuts and did not receive any holiday bonus,” according to a report by Amnesty International.

“We are deeply sorry to our hero health workers, the front-liners, the fighters who have passed away while handling COVID-19 treatment," National COVID-19 Task Force spokesperson Wiku Adisasmito said at a news conference. “Both the task force and the minister of health are very concerned (about) this issue.”