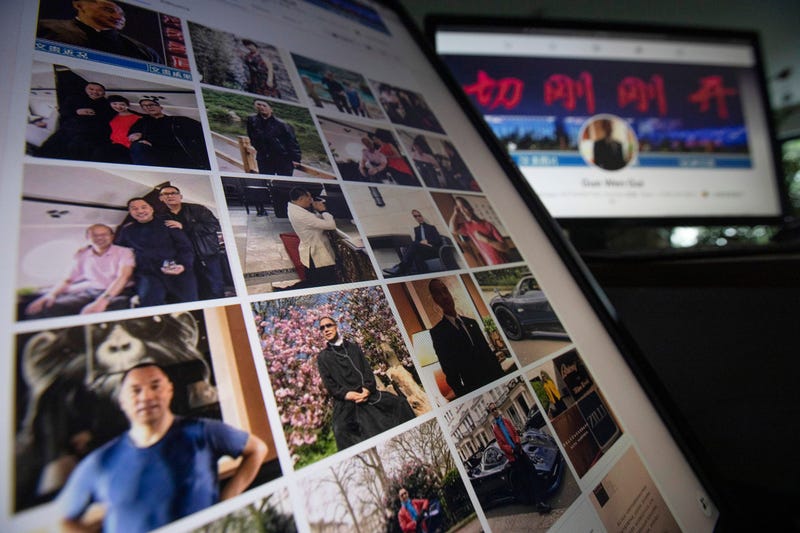 Photo credit Facebook pages from Guo Wengui's account are seen on computer screens in Beijing on Friday, Aug. 21, 2020. The self-exiled Chinese tycoon on whose 150-foot (45-meter) yacht President Donald Trump’s former chief strategist, Steve Bannon, was arrested is a high-profile irritant to the ruling Communist Party. In June, Guo and Bannon announced the founding of the “Federal State of New China,” an initiative to “overthrow the Chinese government.” (AP Photo/Ng Han Guan)
By The Associated Press

Guo Wengui left China in 2014 during an anti-corruption crackdown led by President Xi Jinping that ensnared people close to Guo, including a top intelligence official. Chinese authorities have accused Guo of rape, kidnapping, bribery and other offenses.

A former civil servant turned real estate developer, Guo has rankled the ruling party by launching accusations of corruption on social media. From his base in a Manhattan luxury apartment, he has been especially critical of Vice President Wang Qishan, a Xi ally and key figure in the party's anti-corruption drive.

Bannon, who was arrested on Thursday, was charged along with three others with defrauding online donors in the name of helping build Trump’s southern border wall. Bannon pleaded not guilty at a hearing Thursday in Manhattan.

In June, Guo and Bannon announced the founding of the “Federal State of New China,” an initiative to “overthrow the Chinese government.”

Guo, also known as Miles Kwok, was one of China’s richest businesspeople, with a fortune estimated by Forbes magazine at $1.1 billion in 2015. His most prominent asset was Pangu Plaza, an office-and-hotel complex overlooking Beijing's Olympic Stadium.

The status of Guo’s fortune is unclear. Assets in China have been frozen or confiscated. He is trying to sell his Manhattan apartment; the asking price was cut this year to $55 million. His yacht, the Lady May, is for sale for nearly $28 million.

Guo told The Associated Press in 2017 his goal was to win the release of family members, employees and assets in China, not to undermine the Communist Party.

Also in 2017, however, his lawyer said Guo had applied for political asylum in the United States. Even if the claim is ultimately rejected, that might let Guo stay in the country for years while it is reviewed and during possible appeals.

That came after Beijing asked the international police agency Interpol to issue a “red notice” asking other governments to arrest Guo.

In the first criminal proceeding stemming from accusations against Guo and his companies, three employees were sentenced to prison in 2017 on charges they carried out Guo’s orders to falsify financial documents in order to obtain loans from a state bank.

The former deputy chief of the Chinese intelligence agency, Ma Jian, was convicted in December 2018 of taking bribes to help Guo. The charges included conspiring to blackmail a Beijing city official who blocked a Guo development project.

In 2017, Chinese developer SOHO sued Guo in New York after he accused the company of improperly obtaining regulatory changes to boost the value of its properties. Guo countersued. SOHO dropped its complaint in 2018. A judge dismissed Guo’s suit the following year.

A separate lawsuit filed by a Chinese woman in New York accused Guo of raping her and holding her prisoner for three years after hiring her as his assistant. Guo denied the allegations.