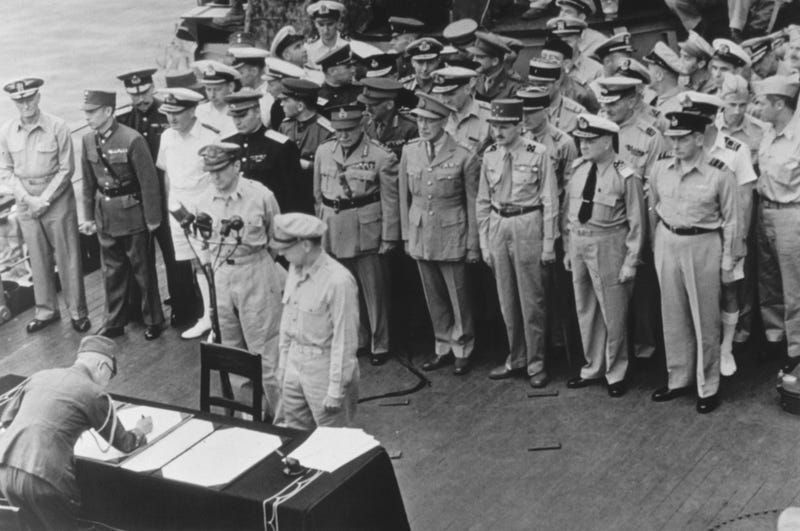 Photo credit FILE - General of the Army Douglas MacArthur, Supreme Allied Commander, and General Wainwright, who surrendered to the Japanese after Bataan and Corregidor, witness the formal Japanese surrender signatures aboard the USS Missouri in Tokyo Bay on Sept. 2, 1945. Several dozen aging U.S. veterans, including some who were in Tokyo Bay as swarms of warplanes buzzed overhead and nations converged to end World War II, will gather on the battleship in Pearl Harbor in September to mark the 75th anniversary of Japan's surrender. (AP Photo, File)
By The Associated Press

PEARL HARBOR, Hawaii (AP) — Several dozen aging U.S. veterans, including some who were in Tokyo Bay as swarms of warplanes buzzed overhead and nations converged to end World War II, will gather on a battleship in Pearl Harbor next month to mark the 75th anniversary of Japan's surrender, even if it means the vulnerable group may be risking their lives again amid the coronavirus pandemic.

The 75th anniversary was meant to be a blockbuster event, and the veterans have been looking forward to it for years. There were to be thousands of people watching in Hawaii as parades marched through Waikiki, vintage warbirds flying overhead, and gala dinners to honor the veterans.

Now, most in-person celebrations have been canceled over fears the virus could infect the veterans, who range from 90 to 101. But about 200 people, mostly veterans, their families and government officials, will still commemorate the milestone on the USS Missouri, which hosted the surrender on Sept. 2, 1945, in Tokyo Bay.

It comes as Oahu — Hawaii’s most populated island and the home of Pearl Harbor — has seen an alarming spike in coronavirus cases in the past two weeks, forcing many restrictions to be reinstated, including a ban on gatherings of more than five people and the closure of all beaches.

“I’ve been told what I need to do in order to be responsible for myself but also toward others," said WWII veteran Jerry Pedersen, who was aboard the USS Missouri and watched the Japanese surrender. "I can’t hug the people that I’d like to hug.”

Pedersen, who will be coming from Sacramento, California, for the commemoration, turned 95 on Wednesday.

“No, I’m not concerned particularly,” he said. “If we would do in life everything the way we’ve been told to handle this pandemic, we’d come through it pretty good.”

Officials plan to keep the veterans socially distanced while they are honored in front of livestreaming cameras instead of live crowds of thousands, as was first planned.

“I want to go back because that day, as much as I remember it, what happened, why we were there, the fact that it was the end of the realities of war and killing and all, it was the first day that I had to start answering, ‘What am I going to do with the rest of my life?’" Pedersen said.

He said he reflects on Gen. Douglas MacArthur’s words "that we’ve got to pursue in peace what we won in war. And I made a decision that day that I wanted to be a peace worker. And my life has been that.” Pedersen became a pastor after the war.

But as cities and states see new waves of COVID-19, some medical experts are questioning the safety of having dozens of vulnerable war heroes flying to Hawaii from all over the United States.

Dr. Peter Chin-Hong, who specializes in infectious diseases at the University of California, San Francisco, said older people are more at risk from COVID-19, especially if they have illnesses like lung or heart disease or diabetes.

“The impact of COVID-19 on the elderly is very pronounced," Chin-Hong said. "I continue to be concerned about ... the impacts of infection on the elderly, not only on acquiring it, but mainly on progressing from infection to disease and being in the ICU and then dying.”

The veterans will board a flight reserved just for them from Oakland to Honolulu. That flight will be about half full, but they need to get to Oakland before the jet shuttles them across the Pacific. Chin-Hong says that segment of the trip is of greater concern because it's more unpredictable.

He said that ensuring the veterans know the risk is important. “As long as people have the information ... that’s all I can really hope for.”

But taking into account the human element of why these men want to attend the ceremony is also important, he said.

“For somebody who may not live to see the next anniversary ... the risk benefit calculus becomes a little bit different,” Chin-Hong said of the aging group. “I feel like sometimes in these settings, you think about risk and benefit in different ways."

Once in Hawaii, the veterans will be isolated in hotels except when attending mostly outdoor events with health screenings and social distancing. The public is not invited, and workers will be continuously screened.

WWII veteran Art Albert, who had come to Hawaii for every commemoration, had promised loved ones that he would make it to the 75th anniversary. But he died in June.

“Somehow, he and the Missouri just connected. Every year as we neared Ford Island, his eyes would fill with tears as he saw what he called his ‘first home,'" Albert’s wife, Sherry, said by email, referring to the USS Missouri.

Michael Carr, president and CEO of the USS Missouri Memorial Association, which operates the museum the battleship has become, was friends with Albert. Of the veterans, he said that “despite the travel restrictions, despite the pandemic dangers, they are determined to be here.”

As of Wednesday, about 60 veterans, each with one companion, were set to attend, but the number has fluctuated as some who wanted to come have died and others have requested to participate last minute.

Hawaii is expected to grant modified quarantine orders for those traveling for the anniversary, allowing them to attend the official ceremony and other events. Otherwise, people coming to the islands are required to quarantine for two weeks.

Gov. David Ige's office said this week that the details are still under review but that the state will do everything possible to ensure the veterans are safely honored.

Defense Secretary Mark Esper and other senior U.S. officials plan to attend the events at Pearl Harbor. Esper's spokesman, John Supple, said the defense secretary is aware of the recent spike of COVID-19 cases on Oahu and everyone in his entourage will be tested for coronavirus before they arrive in Hawaii.

Pedersen, the veteran, says that while the enemy was more defined in 1945, the globe is still at war in many ways.

“We had an enemy that we could see, and we knew how to handle it. Our enemies today are injustice. It’s the lack of respecting the dignity and freedom of every single individual,” Pedersen said.