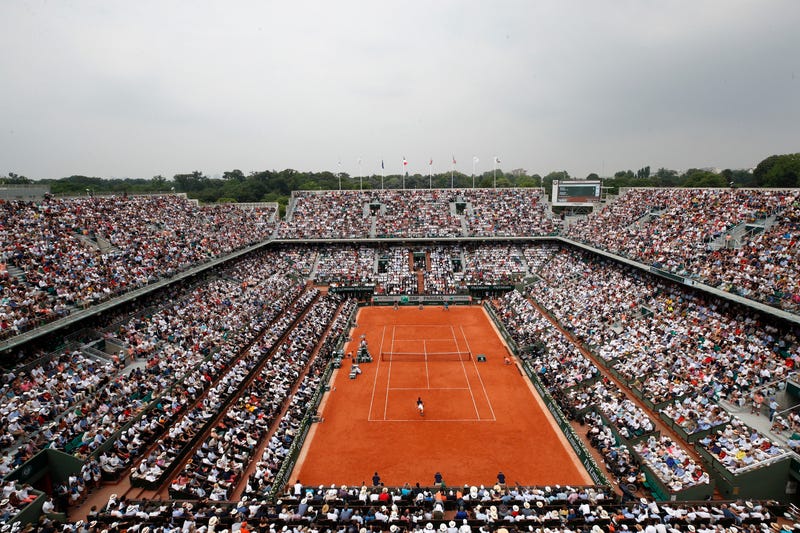 Photo credit FILE - In this June 10, 2018 file photo, the crowd watch Austria's Dominic Thiem serving to Spain's Rafael Nadal during the men's final match of the French Open tennis tournament at the Roland Garros stadium,in Paris. Spectators will be allowed at the French Open later this month despite the growing number of coronavirus cases in the country, organizers said on Monday as they unveiled the health protocols for the clay-court Grand Slam tournament. The event will take place at Roland Garros stadium in western Paris from Sept. 27 after being postponed from its May date due to the pandemic. (AP Photo/Christophe Ena, File)
By The Associated Press

PARIS (AP) — Spectators will be allowed at the French Open this month despite the growing number of coronavirus cases in the country, organizers said on Monday.

They unveiled the health protocols for the clay-court grand slam, which will take place at Roland Garros in western Paris from Sept. 27 after being postponed from its May start due to the pandemic.

“Since the international circuit restarted, Roland Garros will be the first tournament with the privilege of hosting an audience," French Tennis Federation president Bernard Giudicelli said.

Serena Williams and Maria Sakkari, after their spectator-free U.S. Open match on Monday, questioned how the French can open the doors to fans but the players have to be in a bubble. The French are restricting the players to two hotels.

“If there are fans, then we should be able to stay elsewhere, then,” Williams said. “Yeah, that’s interesting, because there is no private housing but there's fans.”

Williams was OK with fans in attendance, but wanted to know more from French Open organizers about “how we will be protected.”

“To have fans and have us in a bubble? For me, it doesn’t really make sense,” Sakkari said. "For me, it was a shocking announcement to have fans.”

In accordance with the latest government guidelines capping attendance to 5,000 people in regions such as Paris, the federation has scaled down its plans.

The federation wanted to welcome 50% to 60% of capacity, the equivalent of about 20,000 fans per day. Instead, Roland Garros will be divided into three zones based on the three main courts, with 5,000 people each for the Philippe Chatrier and Suzanne Lenglen courts. The zone surrounding the third biggest court will host a maximum of 1,500 spectators a day.

Wearing a mask on site will be mandatory, while all accredited people at the tournament will have to pass virus tests to be admitted in the Roland Garros bubble.

Tournament director Guy Forget said all players will be tested upon their arrival in the French capital city. They will be authorized to play if they return a negative test and will undergo a second test 72 hours later. Players will then be tested every five days as long as they remain in the draw, and will have to stay in the two hotels booked by organizers.

Organizers also decided to give more money to the early losers, in a gesture of solidarity toward the players who have been the hardest hit financially by the crisis.

French officials have confirmed more than 30,000 deaths from COVID-19 while the number of new daily cases surpassed 8,000 last Friday.