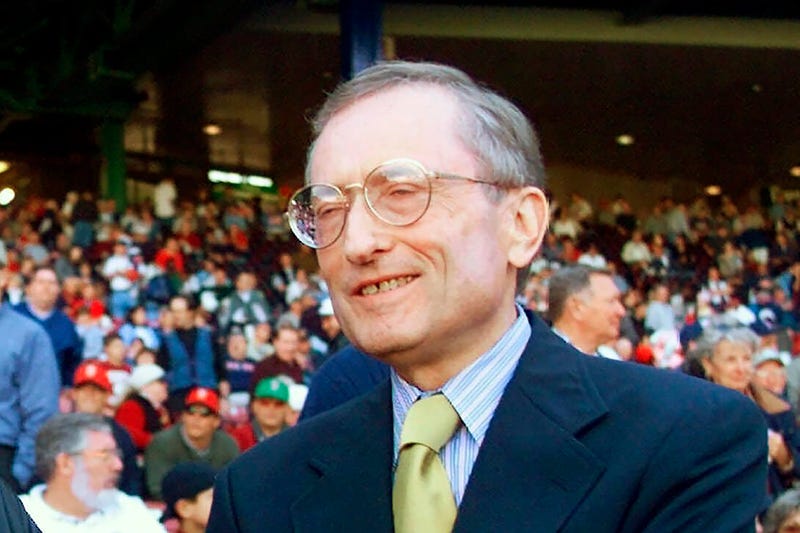 NEW YORK (AP) — Gene Budig, the self-effacing educator and baseball fan from small-town Nebraska who became the head of three major universities and the last president of the American League, died Tuesday. He was 81.

His death was announced by the commissioner’s office and the Charleston RiverDogs, a minor league team he co-owned. No cause was given. He had been in hospice in South Carolina.

Commissioner Rob Manfred said in a statement that Budig was a “friend to many” in baseball and praised his “lifelong connection” to the game. Former Commissioner Bud Selig said Tuesday he “appreciated his work and his support,” calling him a ”wonderful person."

Budig succeeded Bobby Brown as AL president in 1994 and augmented his staff with Larry Doby, the first Black player in the AL. Budig held the job until baseball owners abolished league presidents under a reorganization urged by Selig in 2000.

By then, with interleague play already a part of the game and umpires being put under the control of the commissioner’s office, it was clear those longtime positions were being phased out.

New York Yankees owner George Steinbrenner was among those skeptical of Budig’s credentials. To the bombastic Boss, the outsider -- small in stature, owlish in appearance, exceedingly soft-spoken -- belonged more in school than in sports.

Incensed by a suspension imposed on pitcher Mike Stanton following a brawl between the Yankees and Baltimore Orioles in 1998, Steinbrenner thundered about Budig: “I’m not sure when the last time he wore a jockstrap was.”

Budig, whose childhood dream was to play second base for the Yankees, didn’t publicly respond. Rather, he brandished his razor wit. He contacted old pals at the Kansas University athletic department, had them ship him the largest jockstrap they had in stock, signed it and sent the undergarment to Steinbrenner.

In 2007, when Budig moved to South Carolina, he became a part-owner of the Charleston RiverDogs, a Yankees affiliate in the Class A South Atlantic League. By then, Budig and Steinbrenner were on much friendlier terms.

“Dr. Budig was a cherished friend of our family and someone my father respected immensely for his character, intellect and profound career accomplishments in higher education,” Yankees owner Hal Steinbrenner said.

A chancellor at Kansas and president at West Virginia and Illinois State, Budig also was a newspaper reporter, a governor’s assistant, a major general in the Nebraska Air National Guard and a teacher at Princeton.

Mixing his passion for academics and athletics at Kansas, Budig oversaw a smart move in 1988. With many prominent alumni clamoring for the program to hire a big name to succeed Larry Brown as men’s basketball coach, Budig instead backed someone who had never been more than an assistant in college: Roy Williams, a future Hall of Famer.

“Ol’ Budig knew a little something,” the professor liked to say about many subjects, with a wry smile.

Budig remained close to Williams and they were part of a breakfast gathering every other week in the Charleston area that featured up to two dozen present and past coaches from college and high school basketball and football.

“I always tried to sit next to him,” longtime Maryland football coach Ralph Friedgen said. “He liked to try to instigate things, to turn it up. I did, too. He'll be missed at our breakfasts.”

Born on May 25, 1939, Budig was adopted from an orphanage shortly after birth. He grew up in McCook, Nebraska. He earned three degrees at the University of Nebraska -- a bachelor’s in journalism in 1962, a master’s in English in 1963 and a Ph.D. in education in 1967.

Budig was a reporter and editorial writer for The Lincoln Star and Lincoln Journal while attending school, then worked as an administrative assistant to Nebraska’s governor. He also served in the Nebraska Air National Guard, retiring in 1992.

Budig became an assistant professor of educational administration at Nebraska in 1967 and rose to full professor, assistant vice chancellor and assistant vice president and director of public affairs.

He moved to Illinois State in 1972 as a vice president, dean and professor of educational administration and its youngest full professor. He became acting president in 1973 and president later that year.

Budig was appointed president of West Virginia in 1977 and was hired as Kansas’ chancellor in 1981. He visited all 105 counties in the state during his first year and presided over a campus expansion. He helped lobby the state for money to rebuild an auditorium following a fire, and the building was renamed Budig Hall in 1997.