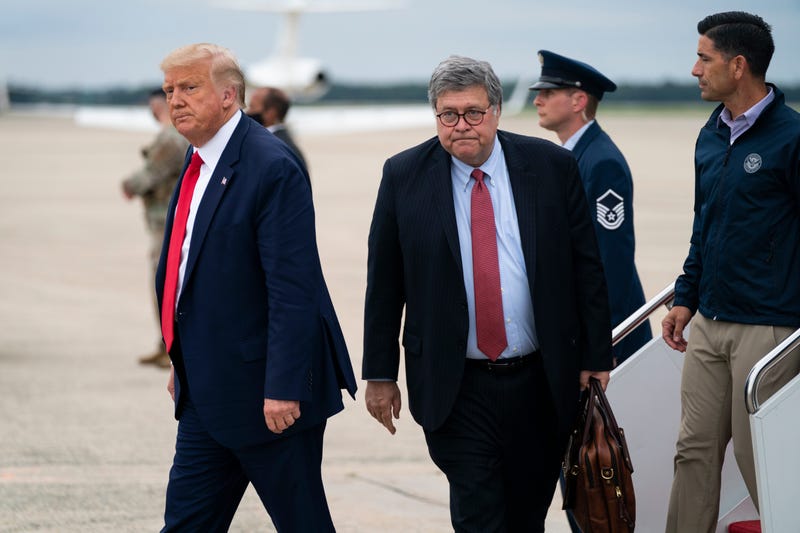 Like Trump, Barr has repeatedly sounded alarms about the November vote despite a lack of evidence pointing to pervasive problems with the process.

That’s important — and worrisome to Democrats — because Barr is no ordinary Cabinet member. As head of the Justice Department, he can shape investigations into election interference and voting fraud. Though the department doesn't oversee elections, it could inject itself into court fights over disputed contests. And any statements from America’s top law enforcement officer questioning election results could further shake public confidence in the vote at a time of widespread disinformation and rumors.

“Those who think that Barr is watching over the interests of Trump rather than the interests of the country have reason to be concerned that he would weaponize the Justice Department’s investigative authority to help Trump at least politically, if not legally, in any post-election challenge,” said Richard Hasen, an election law expert at the University of California, Irvine.

Concerns about Barr among Democrats and election experts outside the department are heightened because he is seen as a loyalist to the president, as well as an ardent defender of broad executive power and a passionate critic of the FBI’s Russia probe.

Barr’s comments, most recently in a CNN interview Wednesday, have been consistent with efforts by Trump and his campaign to attack mail voting as rife with fraud and to potentially lay the groundwork for lawsuits challenging election results. The attacks have continued even though research contradicts the idea of pervasive fraud in the vote-by-mail process and even though intelligence officials say they don’t have information to suggest some of Barr’s gravest concerns, like adversaries printing counterfeit ballots, are close to becoming reality.

Justice Department spokeswoman Kerri Kupec said Barr “has pledged again and again to make decisions according to the law and facts, without regard to political considerations.” Barr has also said he will abide by longstanding Justice Department policy against taking any investigative steps, including prosecutions, designed to affect the outcome of an election.

There are important limits on the Justice Department's potential impact on an election. The federal government, for instance, doesn't administer elections and many core voting functions, like tallying ballots, are handled at the local or state level.

Though the department can prosecute voter fraud cases, it is not empowered to decide which votes count and which do not, nor could it intervene in an unresolved local election and declare a winner, said Justin Levitt, a Loyola Law School professor and former Justice Department voting rights official in the Obama administration.

“There is no piece of litigation, there is no case I can think of, that the attorney general can bring in mid-November to sort out who won,” Levitt said.

But, he added, Barr and the department could very well “take to the airwaves and take to the TV stations” and bang the drum against mail-voting. A potent public messaging campaign from the Justice Department bully pulpit could go a long way in weakening confidence in election results.

In the event of a challenge over a disputed election, brought by an aggrieved campaign or someone else, the Justice Department probably wouldn’t have grounds to initiate a lawsuit but could try to intervene or file a brief supporting a campaign’s argument. Such a move may not have much practical sway on a court but would have symbolic value.

Having to wait until a campaign files a lawsuit, “would not be an enormous barrier to the Justice Department still being able to play a very active role in the litigation,” said New York University law school professor Richard Pildes.

The department’s National Security Division was intimately involved in the 2016 election as it investigated ties between the Trump campaign and Russia. This week, Barr tightened restrictions for national security surveillance of federal candidates and advisers, and though he said Wednesday that Russia may look to interfere again, he considers China a more assertive threat.

He did not disclose the intelligence he said had led him to the conclusion, but an intelligence assessment last month suggested that Russia’s interference was so far more direct than Beijing.

Historically, and particularly before foreign interference came to dominate public attention, the Justice Department’s most direct connection to the election process has been through its Civil Rights Division, which enforces laws including the Voting Rights Act and generally brings cases designed to ensure that voters are not denied access at the polls.

That includes a 2009 lawsuit in the waning days of the George W. Bush administration alleging voter intimidation by the New Black Panther Party and a 2013 case challenging North Carolina provisions seen as discriminating against minority voters.

“We used to get immense pressure from the liberal advocacy organizations who wanted us to get involved and wanted us to put our thumb on the scale in order to achieve whatever policy aims they wanted,” said Bradley Schlozman, who led the division during the Bush administration and supervised voting rights issues.

He said he didn’t view Barr as sowing doubt in the election but rather drawing attention to what he sees as a legitimate problem.

In the last few months, as states have scrambled to ad