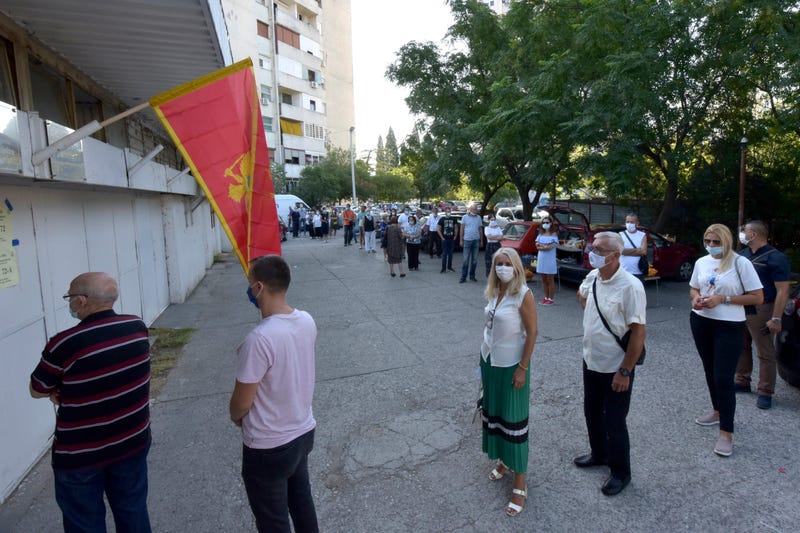 Photo credit People wait in line at a poling station in Podgorica, Montenegro, Sunday, Aug. 30, 2020. Voters in Montenegro on Sunday cast ballots in a tense election that is pitting the long-ruling pro-Western party against the opposition seeking closer ties with Serbia and Russia. The parliamentary vote is marked by a dispute over a law on religious rights that is staunchly opposed by the influential Serbian Orthodox Church. (AP Photo/Risto Bozovic)
By The Associated Press

Which party will rule the tiny Adriatic state depends on whether it could form coalitions, according to the unofficial results.

The election was marked by by a dispute over a law on religious rights that is staunchly opposed by the influential Serbian Orthodox Church. The issue has fueled divisions in the nation of 620,000 people that has defied its traditional Slavic allies Serbia and Russia to become independent in 2006 and join NATO in 2017.

Some 540,000 voters were choosing whether to keep in power the Democratic Party of Socialists, which has governed Montenegro for some 30 years.

Showing high interest in the election, some 75% of eligible voters had cast their ballots by the closure of the polling stations, the state electoral commission said. Lines formed outside some polling stations on a very hot summer day.

The ruling party led Montenegro to independence peacefully from much larger neighboring Serbia and into NATO and on the threshold of the European Union despite strong opposition from Russia.

Nela Savkovic Vukcevic from the ruling DPS party said that based on about 60% of votes counted, the party will win nearly 38% of votes. “This enables us to form the government with our traditional partners.”

“The regime has fallen," said Zdravko Krivokapic, the leader of the opposition For the Future of Montenegro coalition after a vote count by the Center for Monitoring and Research, an independent group.

CeMi said that with some of the 70% of the vote counted, the ruling party had about 35% percent while the main opposition group had about 33 percent. If the result is officially confirmed, the opposition has a bigger chance to form a ruling coalition.

Months of church-led protests against the property bill have raised tensions and fears of potential incidents during and after the election on Sunday.

Authorities are also thinking back to the previous election, in October 2016, when they said they thwarted a planned election-day coup orchestrated by two Russia military intelligence officers.

The DPS and its leader, Montenegrin President Milo Djukanovic, have faced accusations of an autocratic rule, widespread graft and criminal links.

Djukanovic has said Sunday before the vote closed that the results will determine whether Montenegro will continue toward membership in the European Union or allow Serbia and Russia to install their stooges.

“I am absolutely convinced that the democratic will of the majority is on the side of Montenegro and its European future," Djukanovic said after voting on Sunday. He cited alleged attempts to “induce" tensions from outside Montenegro and blasted neighboring Serbia.

“We have all together registered that stampede .... in which the entire Serbian media and political scene is involved," said Djukanovic. “We could possibly pick with tweezers someone who is not involved."

The Montenegrin president, known as the longest-serving European leader, has been a key Western ally in the efforts to push the volatile Balkan region toward Euro Atlantic integration.

Opinion polls ahead of the election have predicted that the DPS will finish ahead of other groups, but might not garner enough votes to form the government on its own.

The main opposition group, the pro-Serb and pro-Russian “For the future of Montenegro" alliance, has backed church-led protests against the religion law, and it wants closer ties with Belgrade and Moscow.

The Serbian Orthodox Church has argued that the law allows the Montenegrin state to confiscate its property as a prelude to setting up a separate Montenegrin church. This has been denied by the government.

About one third of Montenegro's 620,000 people declare themselves as Serbs, which makes relations with Serbia and the Serbian Orthodox Church a highly sensitive issue.

Bishop Amfilohije, who heads the church in Montenegro, has turned openly against the government because of the property law.

Several other smaller parties and those run by ethnic minorities were also in the race that is being held amid the new coronavirus outbreak.