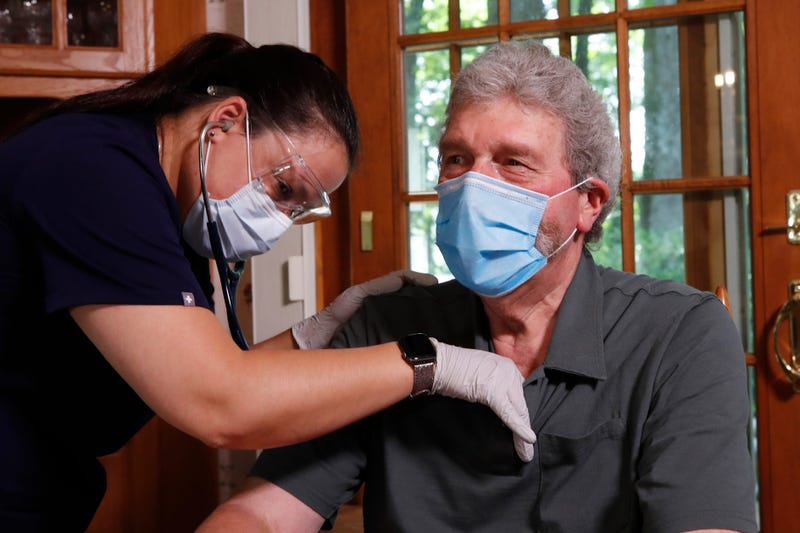 Photo credit Nurse practitioner Sadie Paez uses a stethoscope to listen to the chest of William Merry, who is recovering from pneumonia at his home, Thursday, July 9, 2020, in Ipswich, Mass. As hospitals care for people with COVID-19 and try to keep others from catching the virus, more patients are opting to be treated where they feel safest: at home. (AP Photo/Elise Amendola)
By The Associated Press

As hospitals care for people with COVID-19 and try to keep others from catching the virus, more patients are opting to be treated where they feel safest: at home.

Across the U.S., “hospital at home” programs are taking off amid the pandemic, thanks to communications technology, portable medical equipment and teams of doctors, nurses, X-ray techs and paramedics. That’s reducing strains on medical centers and easing patients' fears.

The programs represent a small slice of the roughly 35 million U.S. hospitalizations each year, but they are growing fast with boosts from Medicare and private health insurers. Like telemedicine, the concept stands to become more popular with consumers hooked on home delivery and other Internet-connected conveniences.

They are linked to 24/7 command centers via video and monitoring devices that send their vital signs. They get several daily home visits from a dedicated medical team. Just like in a hospital, they can press an emergency button any time for instant help.

Research on such programs around the world over the past 25 years shows patients recover faster, have fewer complications and are more satisfied, while costs can be a third lower.

Doctors, hospital officials and patients tout other advantages: People get more rest sleeping in their own bed. They can eat what they want, start moving around quicker and go outside for fresh air. They’re less likely to fall in their familiar surroundings, where they have support from family and even pets.

“I would recommend it in a heartbeat for anybody to be able to stay at home,” said William Merry, who received care for pneumonia in July at his Ipswich, Massachusetts, home. "There was never any problem. Never.”

Merry, who had endured an uncomfortable hospital stay six years ago, refused another one when antibiotic pills didn’t help and his temperature hit 103. So his doctor arranged care through Boston-based Medically Home.

Merry and wife Linda, a retired nurse, said they were amazed at how quickly the service transformed their dining room into a mini-hospital room. Technicians set up medical equipment, gave them supplies and oxygen tanks, then explained how everything worked.

That eased their stress, as did regular video calls with a doctor. They got daily schedules listing planned medical staff visits, blood draws, tests, IV medicine administration and other care, she said.

“I think it’s really important,” she cautioned, “that the person has somebody that’s able to be at home.”

Dr. Bruce Leff, a geriatrics professor at Johns Hopkins School of Medicine and a home hospital pioneer, did pilot studies years ago. He found benefits for elderly patients who, as he said, were otherwise “basically going to get crushed by the hospital" due to risks of developing blood clots and infections, losing mobility and developing delirium.

Even before the coronavirus pandemic emerged earlier this year, some hospitals were considering at-home-care programs to absorb temporary patient spikes — and avoid the high cost of new buildings.

It’s unknown exactly how many U.S. programs exist, but when COVID-19 struck, some institutions rushed to sign up with Medically Home and similar services.

Another company, DispatchHealth, previously focused mainly on preventing ER visits by rushing paramedics to provide diagnostic testing, medication and other care at patients’ homes or elsewhere. The Denver-based company says it has 200-plus contracts with insurers in 19 U.S. markets to treat seriously ill and injured people at home. It piloted a hospital-at-home program in November, already has programs running in three cities and plans rapid expansion.

Some hospitals have mounted their own at-home programs. In late March, eight of the Atrium Health system's 36 hospitals in the Carolinas and Georgia began one for COVID-19 patients who don't need intensive care. It's already treated about 11,000 people.

In New York, the Mount Sinai at Home program went from handling 10 patients a month to up to 30, said its director, Dr. Linda DeCherrie. The program has since added a twist in which patients start care inside the hospital, then finish at home.

“Everybody we offered it to said yes,” said DeCherrie.

DeCherrie said the hospital-at-home model has been used on a small scale in the U.S. since the mid-1990s, but it was held back because traditional Medicare and some insurance plans either didn’t cover such treatment at all or didn’t reimburse for the full cost of care.

But when the pandemic struck, the Centers for Medicare and Medicaid Services temporarily let hospitals bill for care outside their walls, including in patients’ homes. Many private insurers also are covering in-home hospital care during the pandemic. Hospital groups and others want Congress to make those changes permanent, at the same rates as in-hospital care.

Raphael Rakowski, co-founder of 4-year-old Medically Home, said the number of patients treated this July is up tenfold from July 2019.

“Our business is exploding because of COVID,” he said.

It now treats patients for 10 hospitals and one physicians’ group in five states, including two that were set up soon after the pandemic hit: Boston’s Tufts Medical Center and Adventist Health’s West Coast hospitals. Two Mayo Clinic hospitals joined this summer. Medically Home should be operating in 12 states by early 2021, Rakowski predicts.

He says some patients are offered at-home care after being examined in an emergency room. In other cases, doctors arrange the care for patients getting cancer treatment, those with a sudden illness, some about to get surgery, or homebound patients with dangerous complications.

More vets are using the program during the pandemic, said Dayna Cooper, head of agency's home-based programs. One of the busiest, in San Antonio, saw a 90% jump in veterans treated this March through June versus last year.

Another four of the agency's 170 hospitals are working to start programs. Cooper said studies of the programs in Cincinnati and Honolulu found they cut costs by 29% to 38%, without differences in survival or hospital readmissions.

While interest in the programs has skyrocketed, whether in-home hospital care blossoms after the pandemic largely d