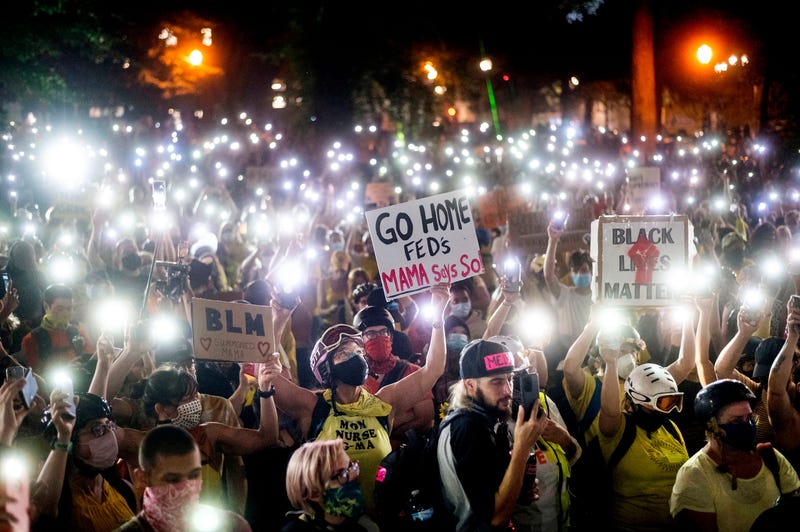 Photo credit FILE - In this July 20, 2020, file photo, hundreds of Black Lives Matter protesters hold their phones aloft in Portland, Ore. Once hailed as one of the most livable cities in the U.S., Portland, Oregon, is grappling with an uncertain future as it reaches a stunning benchmark: 100 consecutive nights of racial injustice protests marred by vandalism, chaos — and now, the killing of a supporter of President Donald Trump. (AP Photo/Noah Berger, File)
By The Associated Press

PORTLAND, Ore. (AP) — Once hailed as one of the most livable U.S. cities, Portland, Oregon, is grappling with an uncertain future as it reaches a stunning benchmark: 100 consecutive nights of racial injustice protests marred by vandalism, chaos — and the killing of a supporter of President Donald Trump.

The demonstrations that started in late May after the police killing of George Floyd in Minneapolis have divided residents and embarrassed the city's beleaguered Democratic mayor.

They have also transformed Oregon’s largest city into a centerpiece of Trump’s “law and order” re-election campaign theme, even as activists slam the police for aggressive tactics.

The slaying of the right-wing Trump supporter gunned down after he came downtown last weekend with a pro-Trump caravan of pickup trucks pushed the crisis further toward a breaking point. The prime suspect in the shooting, self-described anti-fascist Michael Forest Reinoehl, was killed Thursday night by law enforcement.

Amid the turbulence, Portland now finds itself as a proxy for the culture wars sweeping the nation.

The exact date of the 100-day milestone depends on how the protests are counted, but everyone agrees the benchmark falls over the Labor Day weekend. Black Lives Matter protests, vigils and speeches marking the occasion are planned over three days and Trump supporters are planning another caravan rally.

The events come after officials in suburban counties refused a call from Gov. Kate Brown, a Democrat, for their deputies to assist Portland police following last weekend's violence.

“The worst-case scenario is that there’s another incident and it just touches off so much that the city just can’t survive it very well,” said Ron Louie, a former suburban Portland police chief, author of a crisis negotiation book and current Portland State University professor.

And Trump has stepped up threats to send U.S. agents back to the city, like his administration did in July — when agents brought in to stop attacks on a federal courthouse and other U.S. property only reinvigorated the protesters.

Thousands of demonstrators turned out nightly, with some hurling fireworks, rocks, ball bearings and bottles at the agents. They responded with huge plumes of tear gas, rubber bullets and flash-bang grenades that created chaotic, war zone-like scenes.

Those clashes ended July 31, when state police took over from U.S. agents under a deal brokered by Brown and the U.S. Department of Homeland Security. But smaller protests have continued, with groups of 100 to 200 people marching nightly. Clashes are common.

The protesters want city officials to slash the police budget and reallocate that money to Black residents and businesses. Some demonstrators are also demanding the resignation of Mayor Ted Wheeler, a white man and the scion of a timber company fortune.

During the clashes, some have broken windows, set small fires, punctured police car tires with spikes, shined lasers in officers' eyes and pelted them with rocks and frozen water bottles.

The tension reached a new high last weekend when the pro-Trump caravan motored into downtown, with some shooting paintballs and spraying bear repellent at Black Lives Matter protesters who tried to block the streets.

Fist fights broke out and, as night fell, Trump supporter Aaron “Jay” Danielson, 39, was fatally shot as he walked on a sidewalk. Reinoehl, the suspected shooter, was killed late Thursday by a law enforcement task force sent to arrest him outside Lacey, Washington.

After Danielson's killing, Brown sent state police back into the city to help local police. Those troopers have been deputized as federal law enforcement officers by the U.S. Marshal’s Service, which means protesters arrested by state troopers far from federal property could now face prosecution by the U.S. government.

The move appears to be a way to get around Portland's newly elected local prosecutor, who has dismissed hundreds of cases against demonstrators arrested for low-level, non-violent offenses.

Meanwhile, Wheeler is politically sandwiched between Trump and local business owners who want order restored and left-wing groups demanding his resignation for what they call his failure to rein in local police.

A video of an officer chasing down and tackling a protester and then punching him repeatedly in the face this week inflamed calls for more police accountability.

Wheeler announced this week he would move out of his upscale condominium complex after protesters broke windows and set fires there, spooking his neighbors.

“These acts of violence distract us. And they must stop,” Wheeler said on Facebook.

Lost amid the escalating tensions are the voices of the city’s Black residents, who are divided about the best way to keep up the momentum of the Black Lives Matter movement.

Some credit the protests with maintaining pressure on elected officials to address systemic racism, while acknowledging that vandalism and violence by a small subset of protesters distracts from the movement’s message.

“It’s a necessary place we’re in," said Shanice Clarke, one of the founders of the Black Millennial Movement. “I think the whole notion of folks putting their bodies on the line is a pretty powerful act — and a necessary one — especially when that tactic is sometimes the only one available to people like me.”

Others say the street activism — and particularly violence — is taking attention away from other urgent issues affecting the Black community.

A surge in gun violence and homicides has disproportionately impacted the Black community this summer and police say they are stretched so thin that they don't have time to adequately investigate — or even respond to routine calls.

Shootings in in July reached a 30-year high and nearly two-thirds of the victims were Black.

Police Chief Chuck Lovell, who is Black, said the shooting death of a 16-year-old Black boy in a park in recent days was drowned out by national media attenti