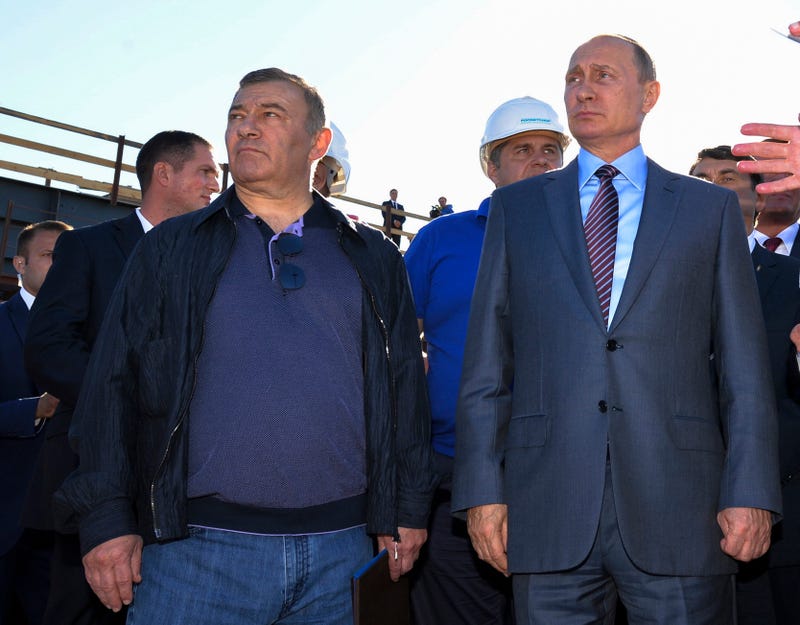 Photo credit FILE - In this Sept. 15, 2016, file photo, Russian President Vladimir Putin, right, joins businessman and billionaire Arkady Rotenberg, during to a visit to the construction site of the Kerch Strait bridge in Kerch, Crimea. Investigators traced $18 million in art buys to shell companies linked to Arkady Rotenberg and his brother Boris, who are close Putin associates who American officials say benefited financially from the Crimean annexation. (Alexei Druzhinin/Sputnik, Kremlin, File Pool Photo via AP)
By The Associated Press

The secrecy of the art world — in which buyers often remain anonymous — gave billionaire friends of President Vladimir Putin access to the American economy even after the United States sanctioned them following Russia’s 2014 annexation of Crimea, the report found.

The Senate’s Permanent Subcommittee on Investigations highlighted loopholes that exempt even the most lucrative art sales from financial safeguards aimed at stopping money laundering.

Major U.S. auction houses acknowledged never asking for the true identity of the buyer, the report found, dealing with an intermediary for the sales in question “even when it was well-known that the ultimate owner was someone else.”

In all, the shell companies linked to the oligarchs moved at least $91 million through the U.S. financial system after the sanctions were imposed, the report found.

"It is alarming and completely unacceptable that common sense regulations designed to prevent money laundering and the financing of terrorism do not apply if someone is purchasing a multimillion-dollar piece of art,” said U.S. Sen. Tom Carper, of Delaware, the subcommittee's top Democrat.

U.S. Sen. Rob Portman, Republican of Ohio, said he supports legislation to lift the “curtain of secrecy” that has made the art industry a preferred vehicle of money launderers.

The Rotenbergs could not be reached for comment. They have been the subject of U.S. sanctions since March 2014, singled out for their close ties to Putin. Arkady Rotenberg is a childhood friend and former judo sparring partner of Putin. His companies won billions in road contracts in Sochi, the host of the 2014 Winter Games.

Global art sales reached about $64 billion last year, with the United States accounting for nearly half the market. The industry remains unregulated in the U.S., however, attracting the likes of racketeers and money launderers.

Any reforms to the notoriously opaque art world will face vigorous opposition from well-heeled collectors “who don’t want anybody to know what they have,” said Robert Wittman, a former FBI agent who founded the bureau’s Art Crime Team.

The report points to new anti-money laundering rules the European Union adopted recently for expensive art deals, including verifying the identity of the buyer and seller of the art. That directive followed the release of the so-called Panama Papers, a collection of more than 11 million secret financial documents that illustrated how some of the world’s richest people hide their money.

The congressional report released Wednesday cited an email chain contained in the Panama Papers that listed nine shell companies in the British Virgin Islands linked to the Rotenbergs.

It said the Rotenbergs' art deals in the U.S. were facilitated by Gregory Baltser, an American citizen and art advisor based in Moscow who has “no plans to return to the United States.”

Baltser's attorney sent the congressional subcommittee a letter denying allegations that he did business with the Rotenbergs.