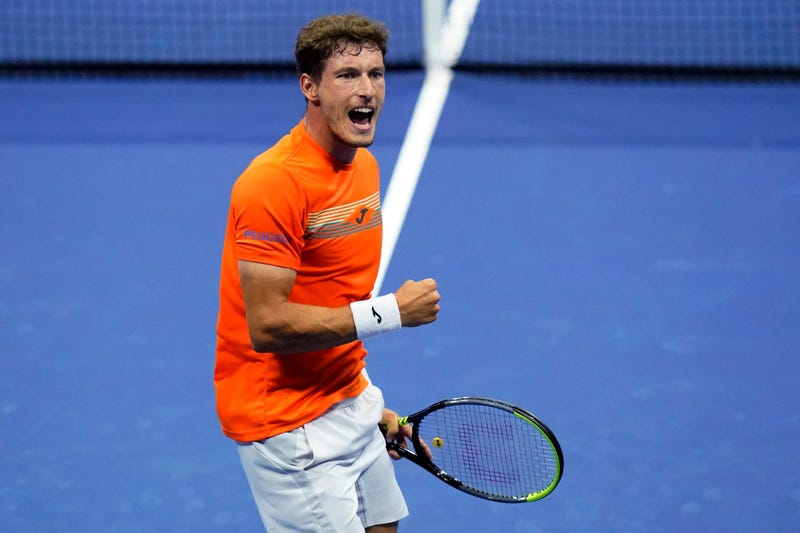 Photo credit Pablo Carreno Busta, of Spain, reacts after winning the third set against Denis Shapovalov, of Canada, during the quarterfinal round of the US Open tennis championships, Tuesday, Sept. 8, 2020, in New York. (AP Photo/Frank Franklin II)
By The Associated Press

Pablo Carreño Busta has beaten Denis Shapovalov in five sets to reach the U.S. Open semifinals for a second time.

That’s a lot more work than the Spaniard put in a round earlier.

One match after advancing when No. 1-ranked Novak Djokovic was disqualified in the first set, the 20th-seeded Carreño Busta expended a lot more energy and outlasted Shapovalov 3-6, 7-6 (5), 7-6 (4), 0-6, 6-3 in the quarterfinals at Flushing Meadows.

Carreño Busta also made it to the final four in New York in 2017.

He will face Alexander Zverev in the semifinals.

Shapovalov took the opening set 6-3, Carreño Busta grabbed the next two in tiebreakers, and Shapovalov forced a decider by rolling through the fourth by a 6-0 score.

They have been playing for 3 1/2 hours. After the fourth set, Carreño Busta was visited by a trainer, who massaged his back.

The winner will face Alexander Zverev in the semifinals.

Osaka’s victory in Arthur Ashe Stadium on Tuesday night was built on seven aces and an ability to get the better of the big hitting by both from the baseline.

Rogers, a 27-year-old from South Carolina, had won all three previous matchups against Osaka.

But this time, Rogers ended up with 27 unforced errors, Osaka just eight.

Osaka, who won the U.S. Open two years ago, will meet No. 28 seed Jennifer Brady in the semifinals.

Alexander Zverev is a Grand Slam semifinalist for the second time in as many majors this year.

The German’s next opponent will be the winner of Tuesday night’s match between No. 12 Denis Shapovalov and No. 20 Pablo Carreno Busta. Zverev reached a major semi for the first time at the Australian Open in January before losing to Dominic Thiem.

For the first time in 17 years at a tennis major, none of the men’s quarterfinalists at the Open has won a Grand Slam title.

It’s quiet at this year’s U.S. Open, where no fans are allowed, and Alexander Zverev wants it even quieter.

Zverev paused before serving in the third set of his quarterfinal match to ask ESPN courtside commentator Brad Gilbert to pipe down.

“I can hear every single word you’re saying,” Zverev said.

Gilbert had just commented on Zverev’s nine double faults in the close match against Borna Coric.

With silence restored, Zverev hit a service winner to hold for 3-3 after the players split the first two sets.