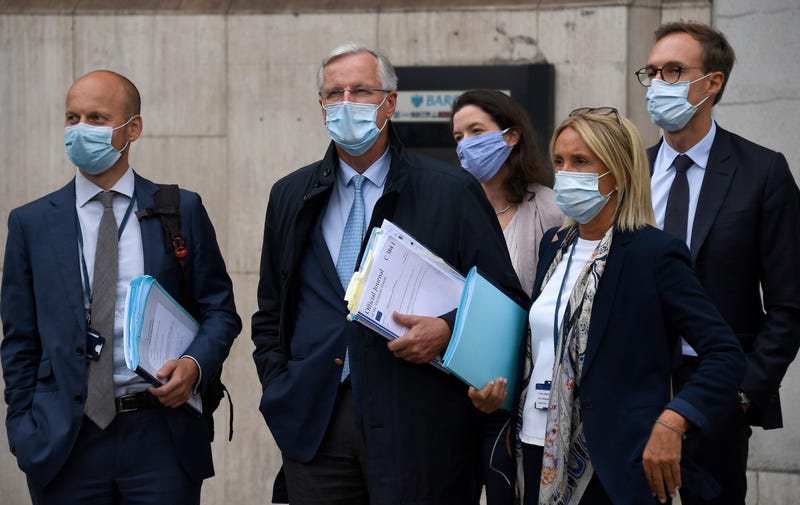 Photo credit EU Chief negotiator Michel Barnier , second from left, arrives with his team at the Westminster Conference Centre in London, Wednesday, Sept. 9, 2020. UK and EU officials begin the eighth round of Brexit negotiations in London. (AP Photo/Alberto Pezzali)
By The Associated Press

LONDON (AP) — Prospects of a trade deal between Britain and the European Union appeared to dim Wednesday, with the EU saying that even the most minor U.K. breach of the Brexit withdrawal treaty would undermine what little trust is left between the two sides.

The warning came as Britain pushed ahead with legislation that it admits breaks international law by overriding parts of the legally binding withdrawal agreement that both Britain and the EU signed up to.

“Breaking international law is not acceptable and does not create the confidence we need to build our future relationship,’″ EU Council President Charles Michel said.

WHY IS BRITAIN CHANGING THE LAW?

Britain left the political structures of the EU on Jan. 31 and will make an economic break when an 11-month transition period ends on Dec. 31. The two sides are trying to strike a new trade deal by then, but talks have bogged down.

The U.K. government says its Internal Market Bill is a “safety net” designed to prevent disruption to internal U.K. trade in the event that there is no agreement by the end of the year.

The U.K. legislation, if passed by Parliament, will remove the EU’s power to impose checks and tariffs in the event that there is no EU-U.K.-agreement, giving that power instead to the British government.

The British government says trade barriers between Northern Ireland and the rest of the U.K. could undermine Northern Ireland’s place within the U.K. and destabilize the peace settlement that ended decades of violence.

Johnson told lawmakers on Wednesday that the legislation was needed to protect against “extreme or irrational interpretations of the (Irish) protocol that could lead to a border down the Irish Sea.”

WHY IS IT CONTROVERSIAL?

Opposition parties and EU officials were astonished when Northern Ireland Secretary Brandon Lewis acknowledged in Parliament on Tuesday that the legislation “does break international law in a very specific and limited way.”

Sefcovic said he was seeking an urgent meeting of the joint EU-U.K. committee on the Brexit Withdrawal Agreement. The U.K. government said it welcomed such a meeting.

Some members of Johnson’s Conservative Party are uneasy, too. Lawmaker Tobias Ellwood, who chairs the House of Commons Defense Committee, said that “to unilaterally ignore any treaty in its obligations which we’ve signed and submitted to the United Nations would actually go against everything we believe in.”

WHY DOES IT MATTER?

Britain’s move threatens to scuttle already deadlocked talks on a free trade deal between Britain and the bloc.

EU and U.K. trade negotiators are meeting in London this week, with both sides gloomy about a breakthrough on the key differences: competition rules and fishing rights. Johnson has said Britain will walk away if there is no agreement by Oct. 15.

Johnson says the U.K. wants a deal but insists a no-deal exit would be “a good outcome,” even though it would see tariffs and other impediments slapped on trade with the EU, which accounts for almost half of the U.K.’s total trade.

Without a deal, British freight firms have warned there could be logjams at ports and supplies of key goods in Britain could be severely disrupted starting Jan. 1.

Richard Burnett, chief executive of the Road Haulage Association, said Wednesday there was an 80% chance of “chaos in Kent,” the English county that contains the major Channel port of Dover, on Jan. 1, even with a trade deal.

He said work to build new customs facilities and border technology was behind schedule.