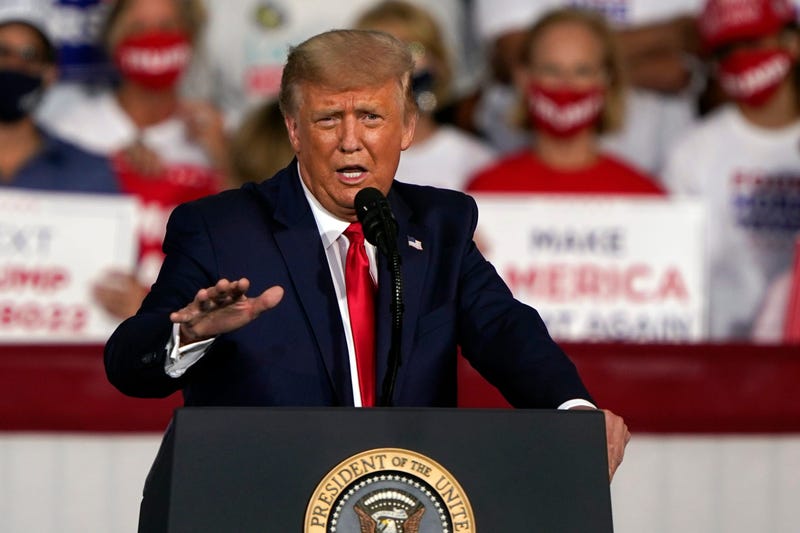 LAS VEGAS (AP) — President Donald Trump's plans to hold weekend rallies in Las Vegas and Reno are in jeopardy after local officials warned they would violate Nevada's ban on gatherings of more than 50 people because of the coronavirus.

Adam Laxalt, the co-chair of Trump’s campaign in Nevada, said in a Twitter post Wednesday that both events to be held at airport hangars Saturday in Reno and Sunday in Las Vegas had been canceled.

Shortly after that, the Nevada Independent reported that the Reno Tahoe Airport Authority warned a company that planned to host the campaign rally for 5,000 people at a private hangar that it would be in violation of the governor's restrictions and the terms of the company's lease for the hangar.

“You are hereby advised that you may not proceed with the proposed gathering,” the letter states.

The Reno airport authority did not respond to messages from The Associated Press seeking to confirm the letter.

Joe Rajchel, a spokesman for McCarran International Airport in Las Vegas, said the airport never received a request to hold an event at the hangar and therefore did not issue any warnings or deny any event requests. Officials with Clark County, which includes the Las Vegas airport, did not send any warnings to the Trump campaign or events hosts, according to county spokesman Erik Pappa.

National and Nevada representatives for the Trump campaign did not respond to messages Wednesday about the reports that the events might be canceled.

White House press secretary Kayleigh McEnany said she was not aware of the issue with the venues, but said: “We believe that if people want to show up and express their political views, that’s their choice to do so. We hand out masks, we encourage individuals to wear those masks... At the end of the day, if you want to join a peaceful protest you can do so. And there’s no reason, just like the protests we’ve seen in the streets, you can’t show up and express your political view at a rally.”

Laxalt, the former Nevada attorney general, said in his Wednesday tweet that both of the president's campaign rally venues in Nevada were canceled. He called it “Outrageous” and “political retribution” from Democratic Gov. Steve Sisolak.

Laxalt added “This isn’t over!” He did not respond to email and phone messages seeking additional details.

“The Governor’s Office had no involvement or communication with the event organizers or potential hosts regarding the proposed campaign events advertised by the Trump campaign,” Sisolak's spokeswoman, Meghin Delaney, said in an email. “Current statewide emergency directives include mandatory face coverings, limitations on public and private gatherings to no more than 50 people, and other measures to mitigate the spread of COVID-19. The Nevada-specific White House recommendations have consistently included recommendations to limit the size of gatherings for weeks now.”