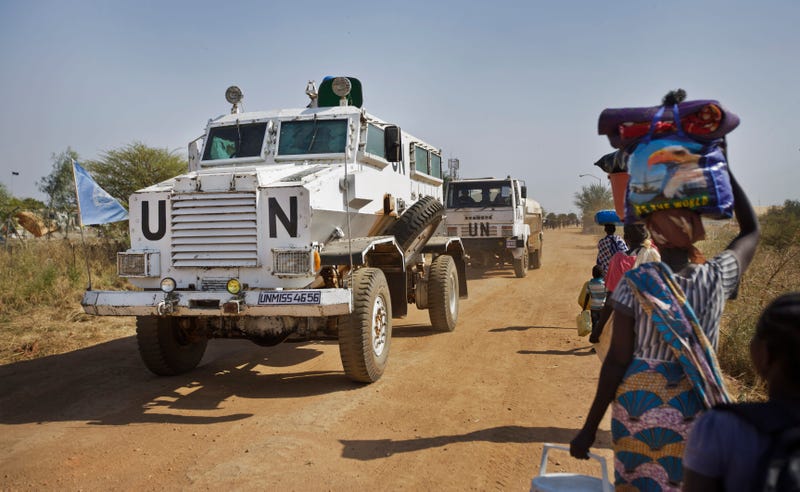 Photo credit FILE - In this Monday, Dec. 30, 2013 file photo, a United Nations armored vehicle passes displaced people walking towards the U.N. Protection of Civilians camp in Malakal, South Sudan. The United Nations peacekeeping mission in South Sudan said on Friday, Sept. 4, 2020 that it has begun withdrawing its troops and police from the protection of civilians camps that continue to shelter more than 180,000 people two years after the end of the country's civil war. (AP Photo/Ben Curtis, File)
By The Associated Press

JOHANNESBURG (AP) — The United Nations peacekeeping mission in South Sudan said Friday it has begun withdrawing its troops and police from the civilian protection camps that began as a frantic experiment in the heat of civil war and still shelter more than 180,000 people two years after the conflict ended.

“It’s a significant withdrawal of numbers for us,” he said, adding that generally a company of 150 soldiers is assisted by one or two companies of police in guarding the camps.

No one will be forced to leave the camps, he said, adding that South Sudan’s government will take over responsibility for their security.

The camps have seen attacks over the years, and insecurity outside them became so severe that some women venturing out for wood or other supplies were sexually assaulted.

The sites were meant to protect people “in imminent physical danger,” and for the thousands still sheltering in the crowded camps, “any threats that existed a few years ago are no longer in existence today,” Shearer said.

It is not clear how long the complete withdrawal will take. The process has begun at the camps in Wau and Bor, the U.N. said. The other camps are in Malakal, Bentiu and the capital, Juba.

Cases of COVID-19 have been reported in the camps, a major concern due to the crowded conditions and the few to no resources for intensive care. Data from the U.N. mission show more peacekeepers have died this year than in any year during the civil war, with the most deaths - 11 - attributed to illness. Six peacekeepers died in June. It was not clear how many died from COVID-19.

There has been talk of closing the camps in recent years. Now, instead, the U.N. mission says South Sudan’s police will be responsible for law and order once the U.N. peacekeepers have gone.

South Sudan still struggles to slowly implement a 2018 peace deal that was meant to lead to elections. Shearer said he does not think the ongoing intercommunal violence in Jonglei threatens the agreement “because I see the main parties very committed to the peace process.”

The concern is that such violence can become political, he added. For now, the heavy rains that have displaced more than 150,00 people in the region are forcing armed groups to pull back, but “tensions still remain very high," Shearer said.

music
The CW revives 'Legends Of The Hidden Temple,' now for adults
news
Camping season is here — Check out the best tents you can buy in 2021
news
WATCH: Fisherman gets chased by alligator after reeling it in thinking it was a fish
news
NYC subway worker receives commendation for rescuing runaway dog from tracks
news
Puppy 'barkour!' See 2 adorable dogs make a sweet escape from their enclosure
sports
Wayne Gretzky resells mansion that once belonged to Lenny Dykstra for $17.6 million