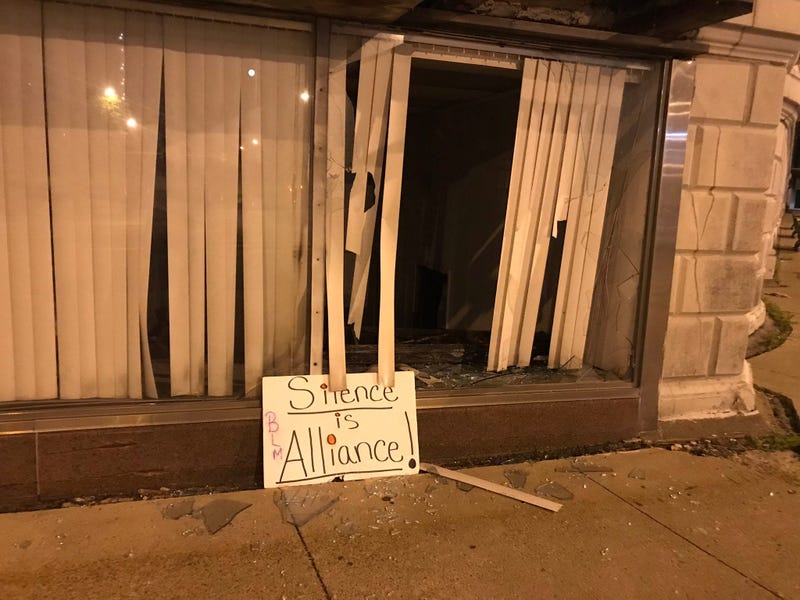 BUFFALO, N.Y. (WBEN) - All clear and quiet on a Sunday morning in Buffalo. A sharp contrast to the events that transpired hours earlier on Saturday night,

A path of damage can be traced back to the protests that began in Niagara Square at 5pm.

"Physical altercations are happening right in front of me," said Tim Wenger, who anchored LIVE coverage of the riots and violence on WBEN. "Police are moving in a line on Delaware Avenue from Mohawk, trying to push these protestors back into Niagara Square."

Police, in riot gear, with face shields and batons, were using tear gas to disperse the crowd.

Late into the night, after a bail bonds van was set ablaze in Niagara Square, one of the protestors threw a flammable object through a city hall window, starting a small fire.

Mayor Brown called out that protestor during a middle of the night news conference. "We have you on camera, you idiot. We're going to find you and prosecute you to the full extent of the law. So get ready, because we're coming."

Buffalo Police Captain Jeff Rinaldo said police made seven arrests. Others are pending and he said they are dedicating all of their resources to identifying people who looted stores and caused damage. "A ton of video surveillance has been collected and we will be working toward making those arrests in the near future," he said.  Dozens and dozens of businesses suffered some kind of damage to their property according to Rinaldo.

Damage was mainly vehicles torched, windows broken and looting. The level of violence, Rinaldo said was kept to a minimum.

Every police agency in Erie County was called in to help last night.

A state of emergency was declared shortly after 10pm Saturday.  A curfew was put in place from 10:30pm until 7:00 this morning countywide.

Sunday morning, there were signs of the city coming back to life. City workers and volunteers were seen cleaning up Niagara Square.