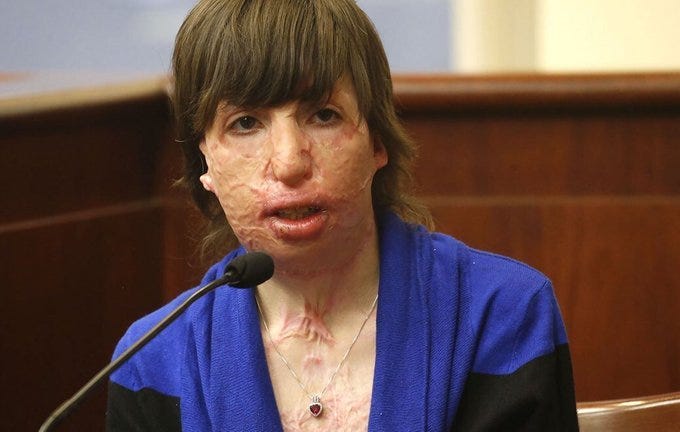 BUFFALO, N.Y. (WBEN) - Attorneys have rested their case in the attempted murder trial of a North Tonawanda man who set his ex-girlfriend on fire outside of a Tim Horton's last December.

Jessica Cameron, the victim of an alleged attempted murder by her ex-boyfriend, Jonathon White, described the harrowing incident last December on the witness stand on Thursday. White asked her to come to a dumpster behind the Tim Horton’s restaurant last December 17 to talk about their struggling 7-and-a-half-year relationship that was crumbling due to multiple reasons including jealous and domestic violence.

The argument at the dumpster soon turned violent.

Very powerful testimony today from Jessica Cameron. Her ex-boyfriend set her on fire last December at a Tim Horton’s in Tonawanda. But did he do it intentionally? That’s what a jury will decide tomorrow. pic.twitter.com/iajTiYHrKz

She said White poured gasoline from an apple juice container onto her head. When Cameron panicked and turned around, she was suddenly surrounded by flames after White put a lighter to her.

“Just burning pain everywhere,” Cameron recalled of being burned alive. “I couldn’t see anything through the flames. Just the flames. I couldn’t hear anything...It was almost like a complete silence.”

Cameron tried removing her clothes in an attempt to stop the burning sensation. She was later doused with water by another person. Evidence in court showed her without clothes recovering from the burns with first responders at her side.

White, 29, told a different side of the story. He said he had no intention of hurting Cameron.

White previously attempted to kill himself on several occasions during their relationship and wanted her to see him commit suicide by pouring gasoline on himself and lighting himself on fire. He told a jury that the two struggled over a water bottle that contained the gasoline. Once White poured the gasoline on himself, his body tensed his body due to the cold temperatures of the gas that was previously left outside in the cold. When he tensed, he said it sparked a lighter that was in his hand.

Video of the incident showed White quickly putting out the flames on himself using snow. Cameron was not able to get the flames off of her quickly, leading to third degree burns on more than 30 percent of her body.

Cameron was taken to ECMC that day and passed out on the ambulance ride there. She woke up the following month and wasn’t discharged from the hospital until April. During that time, she underwent physical therapy to learn how to open and close her mouth and eyes. She also had at least 12 surgeries and relearned how to walk.

Her face is visibly disfigured as a result of the burns. Cameron also lost portions of her fingers due to amputations.

Thursday’s trial was day three of the criminal case. It began with testimony from Cameron’s co-worker and friend, Alexis Curtis, who said that Cameron and White often argued at their apartment in Tonawanda. She said White would look through Cameron’s Facebook page without her consent, something Cameron was upset by.

Shortly after Cameron and White ended their relationship, Cameron moved to her mother’s home with her children and began dating another man named Matthew Corah. A Facebook photo of the two confirmed that relationship, according to Curtis.

White and Cameron had four young children together between the ages of two and seven. The oldest was put up for adoption several years ago. Cameron described three instances of domestic violence with White including her senior prom that White could not attend because he was above the age allowed. Camerson said that White texted her multiple times until she ultimately went home. Once there, she wasl ocked into a room with him, where he cut his leg open then wiped his own blood on her body. White blamed Cameron for his actions that night. On a separate occasion, she claims White physically harmed her and tried to take his own life three days before the incident at the Tim Horton's.

“He refused to acknowledge it and accept it,” she said about their failing relationship.

If convicted of the attempted murder, White faces life behind bars. Closing arguments begin on Friday morning and a jury verdict could be returned then.