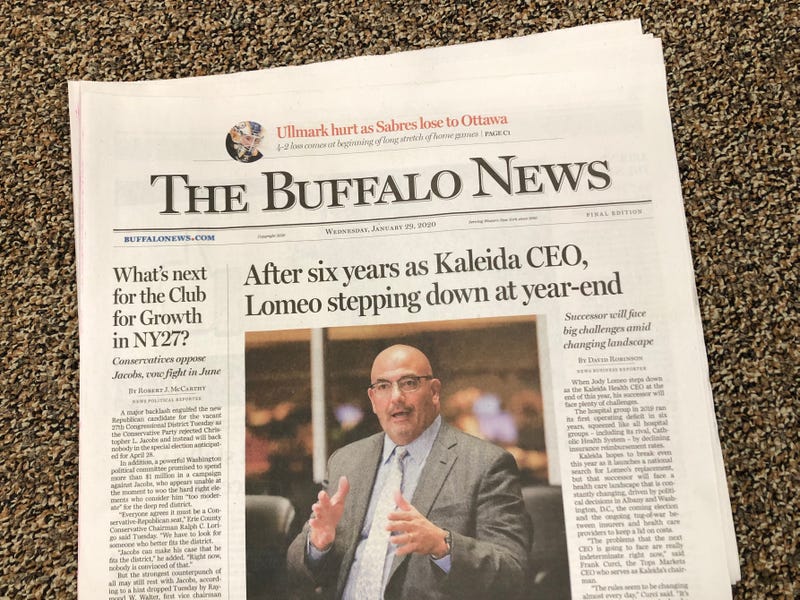 Buffalo, NY (WBEN) - The Buffalo News has been sold to media group Lee Enterprises in a multi-million dollar deal.

In a news release, Lee Enterprises announced it has entered into a "definitive agreement with Berkshire Hathaway to acquire BH Media Group’s publications and The Buffalo News for $140 million in cash."

The paper had been owned by Warren Buffett’s Berkshire Hathaway since 1977. Buffett's company has sold all 31 of Berkshire's daily newspaper operations to Lee Enterprises, including the Omaha World Herald, Buffett's hometown paper.

"We had zero interest in selling the group to anyone else for one simple reason: We believe that Lee is best positioned to manage through the industry’s challenges," said Buffett in a statement on the move.

The deal covers 30 daily newspapers in 10 states as well as 49 paid weekly publications with digital sites and 32 other print products. Among the other daily papers are the Omaha World-Herald in Nebraska, the Tulsa World in Oklahoma and the Winston-Salem Journal in North Carolina. As part of the agreement, Lee will enter into a 10-year lease for BH Media’s real estate.

Berkshire Hathaway is providing about $576 million in long-term, 9% financing to Lee, which Lee will use to pay for the Berkshire properties and refinance Lee’s approximately $400 million in existing debt. Berkshire will be Lee’s sole lender after the deal closes.

Lee’s portfolio will grow to 81 daily papers nearly double its audience size, the company said. The deal is expected to close in mid-March.

In a statement on Twitter, the Buffalo Newspaper Guild said they were "shocked and deeply concerned about the sale of The Buffalo News to Lee Enterprises."

“It's a further unfortunate event for an industry that's already been having a lot of tough times,” Edmonds said.

“I think Buffett is trying to clean some things up. These little pieces aren't worth his time,” said Andy Kilpatrick, who wrote “Of Permanent Value: The Story of Warren Buffett.”