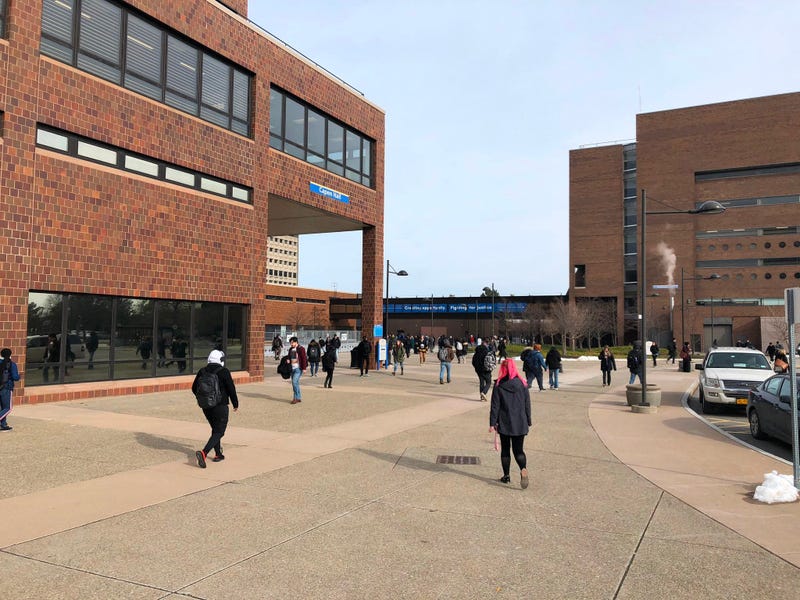 BUFFALO (WBEN) - Monday marked the first day of classes for many college students in the Buffalo area, but of course, this is no ordinary first week of school. The pandemic has caused serious and drastic changes to health protocols around campuses.

"I had some doubts - I had some doubts about coming here; I'm not going to lie," said Buffalo State freshman and Brooklyn native Joshua Bagley. "Because of the pandemic, I didn't know how things were going to work, so I kind of wanted to stay home and do 100% online, but then again, I just wanted to (be on campus)."

Last year at this time, the Buffalo State campus was packed and filled with excitement. While the excitement of a new year may still exist for many, the vibe around campus is much different. On a campus where it's usually difficult to find a parking spot, there were plenty of spaces to choose from. On a campus that's usually bustling with activity, the number of students who walked by was few. On a campus usually filled with sounds of conversation and laughter, the sounds of just one conversation could be heard tens of yards away.

"I have five classes, four of which are online, and one of which is in-person," said junior commuter Alexander Kolasny. "I don't have any of those in-person today, so I primarily just came around to see how the school was going to be functioning, because even though I read all the emails, I still couldn't quite get the picture of how it was going to look and how things were going to be different, so I just came to print out my syllabuses, to see what the campus was like, get accustomed to the new way of how things need to be done."

And Kolasny explained what some of those changes entail.

"All of the buildings require you to scan your Buff State ID to enter the buildings, which is something that being here for the time that I've been here already, is new and I'm slowly adjusting as every building asks you to scan yourself before you can come in," he began. "There's just a lot of one-way-in buildings and a one-way-out kind of thing to police the traffic, to spread the congestion in certain areas like the union or library, which are two of the more populous buildings on campus."

"Not at all - I was really eager to start college, so I was excited that they are allowing in-person classes," said Seufert, who then described what her new routine will be. "In the beginning of the day, we all have to do our daily health screening on our phones; we all have to have our mask on properly, covering our nose and chin, and then you may enter a building."

Bagley discussed the bizarre and sometimes stressful conditions associated with dorm living amid a pandemic.

"It's nerve-racking," he said. "You just have to be very careful, very clean, wipe all the door handles and other types of things, but other than that, it's fine."

While he understands the need for safety measures to be put in place, Kolasny noted that one of his favorite aspects of college will be almost non-existent as the fight against COVID-19 continues forward.