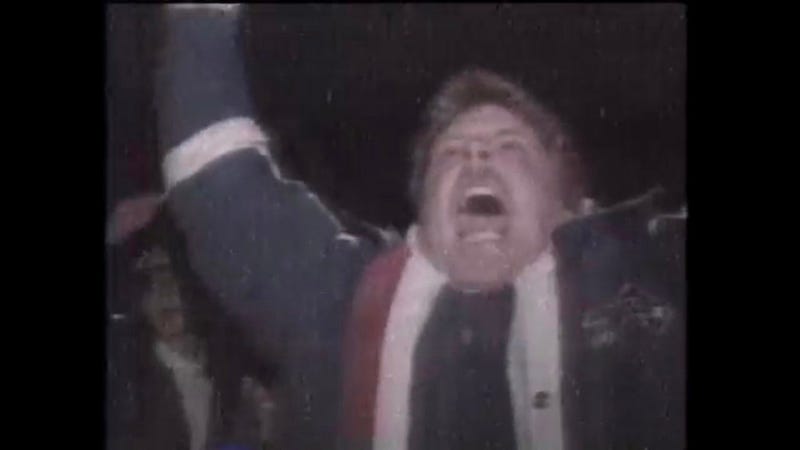 BUFFALO, N.Y. (WBEN) – One of the all-time famous Buffalo Bills fans is reflecting on his notoriety 27 years after a famous interview.

Marc Miller, a Buffalo Bills fan whose passion exuberated about the Bills heading to Super Bowl 27 during an interview with Channel 2 in 1993, spoke with WBEN in-depth about his famous interview at Prior Aviation by the Buffalo Airport after the Bills returned home from a victory against the Miami Dolphins.

Miller said there’s some misconceptions about the interview. For starters, he wasn’t even the person who was supposed to be interviewed.

“The reporter was interviewing – it’s kinda sad to say this - this little young man that couldn’t have been any younger than my son’s age,” Miller said. “They asked ‘so what do you think about the Bills going to the Super Bowl?’ The kid was tongue tied. So I kind of pushed him out of the way and that’s when the interview started with me.”

“My family knows that to be me every game,” he said. “If you have a TV camera in my house watching every Bills game you’d wonder what the hell is wrong with this guy?”

His interview on local television was picked up by other companies. His popular video that has more than 500,000 views on YouTube but millions of more views on social media platforms.

Two other misconceptions was that the popular YouTube video (see above) was not the original Channel 2 story and that he was definitely not drunk during the interview. In fact, Miller doesn't drink at all.

“My emotions in anything that I’ve ever done in my life – I’ve been in business 31 years, been married 39 years, have wonderful kids, have a grandson that was born a couple weeks ago – I put my heart and soul into it,” Miller said.

He said that he’s received lots of attention over the last three weeks as the Dallas game approached.

The interview has also led to some recent developments that disturbed him. Nasty comments on the internet is one thing, but he said he was most perturbed by a recent promotion by a local brewing company and a beer that was released bearing his photo and his famous phrase.

“They decided, without my permission, to put a likeness of me on that can of beer,” Miller said. “I was told they sold out of the beer and everything the day they did their introduction of that type of beer. I thought it was very distasteful. Number one, I don’t drink. Not that I’m against alcohol, it’s just never been in my life.”

He said he was told by that company they didn’t need to have his permission to use his likeness.

“Well I think you’re gonna have a problem with that one legally,” he said. “It’s just not cool to do that in my opinion. I would never take advantage of a client or person for monetary gain. I just wouldn’t do it. To me, it’s just a shame on you for doing that.”

He also was caught off guard when the Buffalo Bills used his likeness to promote ticket sales in a commercial.

“They should call me and give me a suite or something,” Miller quipped. “You can’t just take a likeness of someone and use it for promotional gain. Unless you’re gonna let me use Josh Allen on my website to promote my company.”

But he did give praise to one local company. 26 Shirts, who often creates Buffalo-sports-inspired t-shirts to benefit a cause, is a project that Miller is more than happy to work with.

“(Del Reid) reached out to me to want to do a likeness on his t-shirt to help raise money for those less fortunate,” he said. “I know they’ll make a few bucks off it and that’s cool. I’m a businessman too and I understand it. Just to hear that they’re doing something like this to help people in the Western New York area is commendable.”

A fan since he could hold a transistor radio, Miller has lived through all the heartache of the organization but is extremely optimistic about Josh Allen, believing he could be a superstar in the NFL if people can show patience with the young quarterback.

Miller even had open-heart surgery a few years ago and asked his doctor to double-check if he has blue blood.

“He said to me ‘Mark, I didn’t find any blue blood. But, for some reason, right on your heart there was this miniature guy who held a pennant that said GO BILLS’,” Miller reflected.

Despite the fame and the spectrum of attention it brings, it doesn’t waver his love for the Buffalo Bills.

“I don’t just show up on Sunday,” he said. “Never will. I’ll die in my bed before I give up my emotion about being a Bills fan.”

Miller still lives in the area today and works for ultrasonic blinds cleaning company Dirty Blinds. He has two children, ages 38 and 32, and a newborn grandson.

Miller still watches Bills games to this day, but avoids going to New Era Field. He said the in-game atmosphere is fantastic but he’s turned off by all of the rowdiness associated with a Bills tailgate.

As for Thursday against Dallas:

“(A win) would take them to the next level,” he said. “To beat a team, even though Dallas is 6-5 and all that, to beat that stigma of we can’t beat Dallas…that’s when the arrival of the Bills of the 90s as I call it would arrive. When they win that big game. Not the Miami’s…These players should be fired up!”