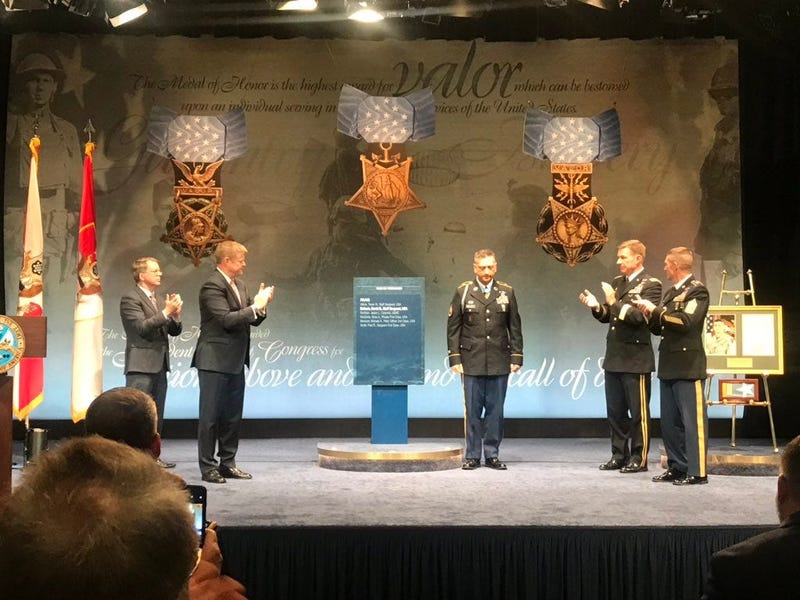 The Pentagon (WBEN/Connecting Vets) - In a moving ceremony in the auditorium deep inside The Pentagon, David Bellavia took the stage following numerous dignitary remarks and spoke from his heart wearing the Medal of Honor he received Tuesday at The White House.

The Hall of Heroes is a dedicated space that opened in the Pentagon in 1968 to recognize every Medal of Honor recipient. The names of each of the roughly 3,600 recipients are listed there for recognition.

Bellavia's induction ceremony was led by Acting Deputy Secretary of Defense David Norquist who described just how rare of a hero Bellavia truly is.

"We may use the term hero all the time. But there are in fact heroes among our heroes and they are very rare," Norquist said. "Since the Medal of Honor's creation in 1861, of the tens of millions who have served in the U.S. military, less than 3,600 medals have been awarded each after painstaking deliberation and consideration."

However, consistent with his efforts at Tuesday's Medal of Honor ceremony to ensure his unit receives as much recognition as he does, Bellavia requested that Norquist also recognize his unit during the Hall of Heroes induction.

"David would also ask us to push the spotlight from himself back to his unit," Norquist said. "Let me highlight for the audience that the heroism displayed during the course of the Battle of Fallujah earned Task Force 2-2 the Presidential Unit Citation. David and his fellow soldiers here today come from a task force of heroes."

And when it was Bellavia's time to speak, he told the stories of the men in his squad — the men who comprise his memories and his understanding of the Iraq War.

"That is my Iraq War," Bellavia said after describing individual members of Task Force 2-2 — many of them were present at the induction ceremony. "And it makes me proud to have told my dad no to dental school. I learned much more from living and fighting with these men than I could have from a lifetime of doing root canals."

And it's those men, along with all of the United States's combined military force, that Bellavia believes any enemy of this country should avoid.

"The threats to our nation — they don't sleep," Bellavia said. "They're watching our every move. Iran, Russia, China, North Korea, ISIS, Al Qaeda. They may be watching this right now. We have been honed into a machine of lethal moving parts that you would be wise to avoid if you know what's good for you.

"We will not be intimidated. We will not back down," Bellavia continued. "We've seen war. We don't want war. But if you want war with the United States of America there is one thing I can promise you so help me God. Someone else will raise your sons and daughters."

Want to get more connected to the great stories and resources Connecting Vets has to offer? Click here to sign up for our weekly newsletter