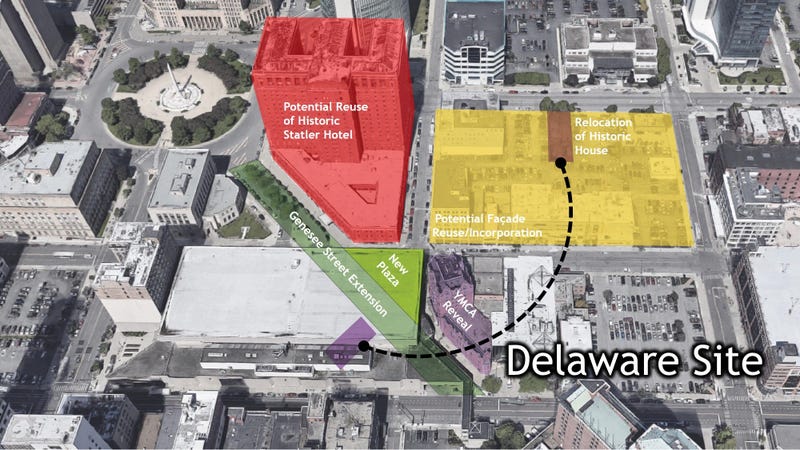 Erie County Executive Mark C. Poloncarz was joined today by President and CEO of Visit Buffalo Niagara Patrick Kaler to present the results of Erie County’s Phase II Convention Center Study, conducted by TVS Design and examining the feasibility and probable cost of potential sites for the construction of a new Convention Center.

The sites examined in the Phase II study included a “Statler site” incorporating the historic Statler Hotel and utilizing the existing Convention Center; an “HSBC site” adjacent to the existing HSBC Building and bordered by Perry Street, Scott Street and Michigan Avenue; and, instead of renovation of the current facility and construction of a new “wing”, the construction of one facility at a “Delaware site” on Delaware Avenue next to the Statler hotel and bordered by Franklin, West Mohawk, and West Huron Streets.

"The construction of a new convention center.....is the best option for our community", said Poloncarz as officials detailed the pros and cons of the various sites.

The Delaware site, directly north of the Statler hotel, provides the greatest value for the least cost, according to the study. This site would meet the recommended program area, have good operational serviceability, and would allow a return to Buffalo’s radial street grid through the re-opening of Genesee Street downtown to Pearl Street (currently blocked by the existing Convention Center, which would be razed in this plan). This location also takes advantage of existing hotels, restaurants and commercial activity in the City while also preserving the integrity of the historic Statler, which would be poised for investment as a functioning hotel and tourism center.

“The Delaware site is the option that presents the best return on investment and offers the most exciting, transformative vision for Buffalo", said Poloncarz. "It offers the proper amounts of space needed for the many functions of a modern Convention Center, it is in close proximity to existing hotels and restaurants, and it is right next door to the historic Statler hotel, which will now attract more attention and investment as it returns to its former glory. This is a visionary plan that will transform the City and the county.”

The Erie County Comptroller's Office is out with a detailed statement saying the actual costs associated with the new convention center would be far higher than the $441 million being quoted.

According to an independent fiscal analysis by financial advisors Hilltop Securities completed on Wednesday, February 12th, the estimated interest payment on a proposed $441.7 million convention center would be $255,116,287.  That brings the real cost of a new convention center in the heart of downtown Buffalo to a whopping $696,816,287. That is almost double the cost of retrofitting an NFL football stadium, Arrowhead Stadium, home of the Super Bowl Champion Kansas City Chiefs.  The cost for that project was $375 million in 2010.

The Comptroller's office states the interest payments per year on a proposed new convention center would be $23,229,886 million.  This would increase the county’s annual debt service by more than 50%.

In addition to the total cost of almost $700 million, the back breaking financial burden of a new Convention Center on already over-charged taxpayers of Erie County is something not likely worth the risk, according to fiscal data compiled by Erie County Comptroller Stefan I. Mychajliw, Jr.  With New York State facing a $6 billion shortfall, potentially sticking Erie County with an additional $177.5 million Medicaid bill, combined with the costs of a new or retrofitted stadium for the Buffalo Bills, Erie County revenues will already be stretched thin.

“Where is Mark Poloncarz getting the money for a new Convention Center?, asks Comptroller Stefan Mychajliw.  "He’s going to dip into the pockets of overburdened taxpayers.  High tax burdens are forcing people to flee New York State in droves.  Erie County government might get gutted if Governor Cuomo has his way and sticks us with a bigger Medicaid bill.  Taxpayers will also bear the burden of paying for a new or retrofitted stadium for the Buffalo Bills.  Enough is enough", states Mychajliw.

“Keep in mind, politicians have talked about building a new convention center from almost the time the lights were first turned on in our current facility.  The fact remains: since 2017, $386,000 was wasted on studies that tell us what we already know.  The current convention center is outdated and ill-equipped. A new one might be nice for some.  The reality is, we don’t have the money to pay for it.  Building a new one would cost money this community, and now even the state simply doesn’t have,” said Mychajliw.